The Vancouver International Film Festival (“VIFF”) is known for showcasing local, Canadian, and international film talent and this year homegrown talent is front and centre as VIFF has just confirmed 13 features for the BC Spotlight program. 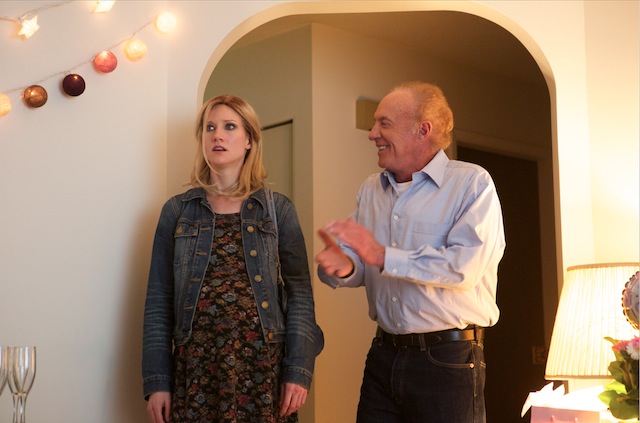 Sonja Bennett of Vancouver and James Caan in Preggoland.

About #MustSeeBC: VIFF will offer two significant BC Spotlight cash awards. The Best BC Film award includes a $10,000 development bursary provided by the Harold Greenberg Fund (The Fund). Meanwhile, the BC Emerging Filmmaker award consists of a $7,500 cash prize sponsored by the Union of BC Performers/ACTRA and ACTRA Fraternal Benefits Society plus a $10,000 equipment credit supplied by William F. White. (Films must be signatory to a UBCP/ACTRA agreement to be eligible.) Winners of these awards will be determined by the members of the BC Spotlight jury.

Last year’s #MustSeeBC winner was Leap 4 Your Life, which was sponsored by Miss604, and I’m proud to once again sponsor a BC film this year.

Preggoland (Director Jacob Tierney) Screening sponsored by Miss604
35-year-old Ruth (Sonja Bennett, who also penned the uproarious screenplay) fakes being pregnant to fit in with her child-rearing friends. This latest comedy from Jacob Tierney (The Trotsky) will have you cringing in between fits of uncontrollable laughter as Ruth’s web of lies becomes increasingly tangled. The road to acceptance has never been so baby-bumpy and this local comedy will have you laughing until you birth. Sorry, burst.

Black Fly (Director Jason Bourque)
Jake Henson (Dakota Daulby) is a troubled teen haunted by the deaths of his parents—his father in a hunting accident and mother by suicide—who escapes an abusive uncle to reconnect with his older brother Noel (Matthew MacCaull). In director Jason Bourque’s taut thriller, their reunion on an isolated island on the BC coast shows that even though blood is thicker than water, it’s still blood. And it’s messy as hell.

Bloody Knuckles (Director Matt O’Mahoney)
After having this hand lopped off by a gangster he’s offended, a brash underground cartoonist watches the disembodied appendage return to life and become a reanimated avenging angel/defender of free speech. Deliriously irreverent, wantonly vulgar and perversely gory, Matt O’Mahoney’s splatter horror flick is one of the year’s most gonzo genre offerings and “signals an underground spirit thriving in Vancouver…”—Spectacular Optical

The Boy From Geita (Director Vic Sarin)
Born with albinism, young Adam is ostracized in his Tanzanian village and violently assaulted by witch doctors who believe that his limbs possess mystic properties. A Canadian born with the same condition hears of Adam’s plight and takes action. “Harrowing and poignant… Vic Sarin’s [documentary], with its searing images, is both ode to human resilience and ingenuity, and indictment of human cruelty and stupidity.”—Globe and Mail

Everything Will Be (Director Julia Kwan)
Director Julia Kwan documents the pivotal changes affecting the culture and economy of Vancouver’s Chinatown, one of the oldest in North America. With humour and sympathy, Kwan introduces us to residents who see their way of living eroding and to others who welcome the transition, including contentious real estate consultant Bob Rennie.

Martin’s Pink Pickle (Director René Brar)
A boy follows his girlfriend to Hope, an ironically named small town where his dreams die a slow death. However, his settled lifestyle is disrupted by a trip back to the city for a medical appointment, where he and a friend become stranded for 24 hours. René Brar tells the story of two troubled kids who never really grew up while examining the complex nature of relationships.

The Pristine Coast (Director Scott Renyard)
Wild fish populations in BC have been declining since the late 70s, roughly the same time the open net fish farm industry began to grow fish in marine waters. Focussing on the research of biologist Alexandra Morton, filmmaker Scott Renyard links the crash of many fish species on Canada’s West coast to diseases spread from fish farms in this persuasive and urgent call to action.

Songs She Wrote About People She Knows (Director Kris Elgstrand)
Carol (Arabella Bushnell) has a unique way of dealing with her frustrations with family, friends and co-workers: writing brutally honest songs (that frequently feature threats of violence) and leaving them on their voicemail. Carol’s creative catharsis has some immediate and unexpected consequences in this hilarious, offbeat comedy from writer-director Kris Elgstrand.

Turbulence (Director Soran Mardookhi)
Writer-director Soran Mardookhi brings us the moving story of Sherzad (Kamal Yamolky) and his estranged young daughter, Jina. A former electrical engineer in Iraqi Kurdistan, he’s now trying to make a new life for himself in his adopted home of Canada. Jina (Camillia Mahal) numbs her harrowing childhood memories with drugs. But even among other misfits, she has a hard time fitting in…

Two 4 One (Director Maureen Bradley)
Maureen Bradley’s debut feature is a bittersweet romantic comedy with a transgender hero in an unimaginable predicament. Oddball couple Miriam and Adam have an ill-advised and pivotal one night stand that sees them both wind up pregnant. Engagingly shot by Amy Belling, watch for standout performances from Gavin Crawford (This Hour Has 22 Minutes), Naomi Snieckus (Mr. D) and Gabrielle Rose.

Violent (Director Andrew Huculiak)
Best known as the drummer for Vancouver-based We Are the City, Andrew Huculiak makes his directorial debut with this beautiful, atmospheric film shot in Norway and inspired by the band’s latest album. It stars newcomer Dagny Backer Johnsen as a young woman who, after enduring a catastrophic event, loses herself in memories of the people who loved her most.

The 33rd annual Vancouver International Film Festival will run from September 25th to October 10th and will also feature 20 short films from British Columbia directors. The full program, with hundreds of titles, will be released in September with tickets going on sale September 4th. Passes and packages are available online now. Follow VIFF on Twitter and Facebook for the latest information and schedule updates.

Also on Miss604.com
« Summer of Bear Discovery at Grouse Mountain
Westham Island Herb Farm: A Day at the Farm »