Vancouver is an ever-changing city, with new construction cranes popping every day, scaffolding being dismantled, new pits being excavated, and demolitions scheduled. Our city’s skyline, downtown streets and landscape seems to change dramatically every few years, which is why I believe we’re all pretty obsessed with “Then and Now” images. There are many resources for these “Before and After” images, like the wonderfully in-depth Changing Vancouver, and other blog features like I have done since 2009. Now there are two recent project that have been kicking it up a notch, providing a fascinating batch of comparisons.

According to the Langara College program: “The Merging Time assignment is one of the cornerstones of the PHOT 1248 course in the first year of Professional Photo-Imaging. Having chosen a historical image from the City of Vancouver Archives collection, the Professional Photo-Imaging students returned to the original location to capture a new image in our current time.” Langara then posts the results on their Flickr account: 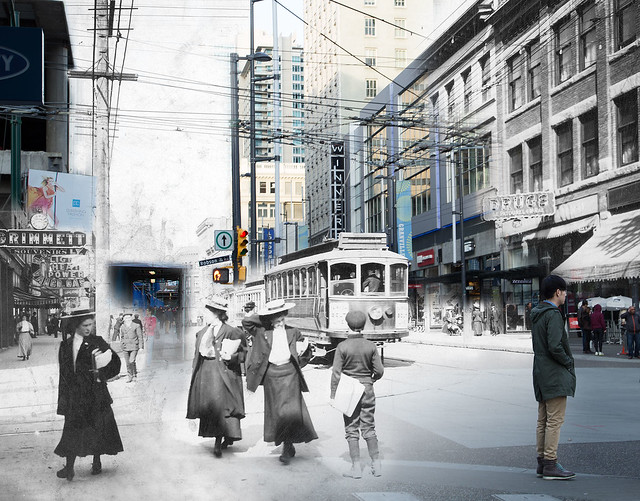 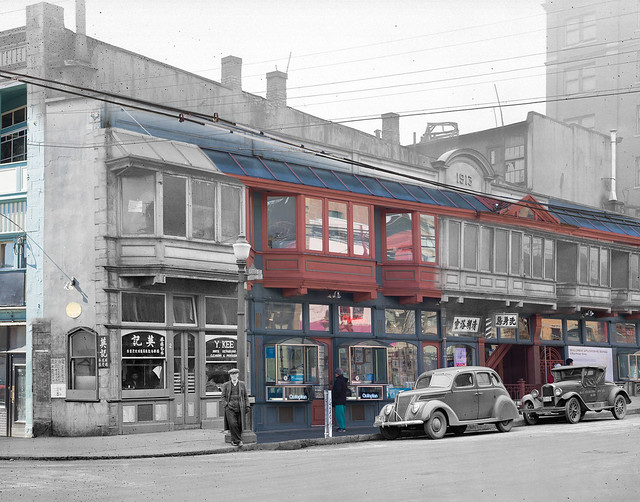 View albums from Langara’s 2013 and 2014 photography classes on Flickr.

Fred Herzog is a legendary photographer who mastered street photography and gave us an archive of colourful images that give us a glimpse of everyday Vancouver. Scout Magazine‘s Andrew Morrison decided to walk around with his copy of Fred Herzog Photographs (Douglas & McIntyre, 2011) and along with his son, he tried to shoot the exact locations depicted in Herzog’s work from the 1950s and 1960s. 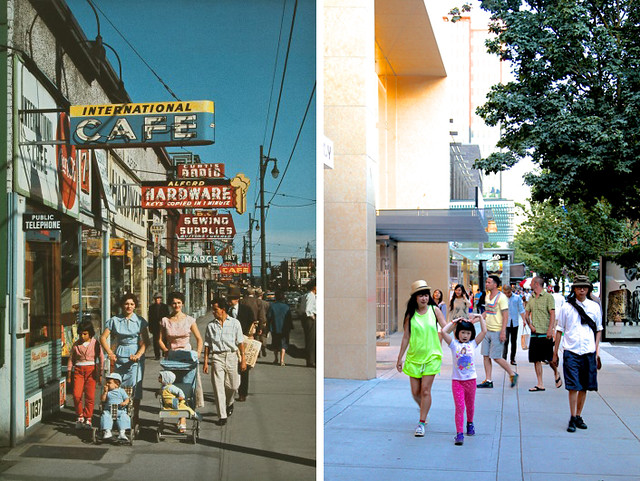 Morrison writes: “Because of our familiarity with the territory, most of the locations have been easy to pick out. Others are proving far more difficult because much of what was once there is no more. Truly, working on this has really brought home how dramatic the changes to this city have been over the last 50-60 years. And yet, in some places, it’s uncanny how it has remained largely the same.”

Also on Miss604.com
« Free Outdoor Movies in Vancouver Robin Williams Tribute
Things to do in Vancouver This Weekend »