Less is more, especially when it comes to stripping away thousands of square feet from an iconic stadium and creating a memory-triggering graphic that has caught the attention of thousands of fans — and Major League Baseball. S. Preston Art + Designs has created a wildly popular Minimalist Ballpark graphic series that went viral online and can now be seen hanging on the walls of Target Field in Minneapolis, among others.

Click to view all and to purchase a print

I caught up with my longtime friend Preston shortly after he moved back to Vancouver from Los Angeles, where he had been working for the last two years, to talk about the success of the ballpark series.

“I’ve been graphic designing for so many years for corporate clients and I love sports. Finally I merged the two together and it’s come out into something that everyone sort of loves right now.” Preston said once the designs for all 30 stadiums were complete last year, he put them online and found that they went viral really quickly. The first major outlet to pick them up was USA Today, followed by Sports Illustrated, ESPN and then Deadspin, which he credits as being the tipping point. 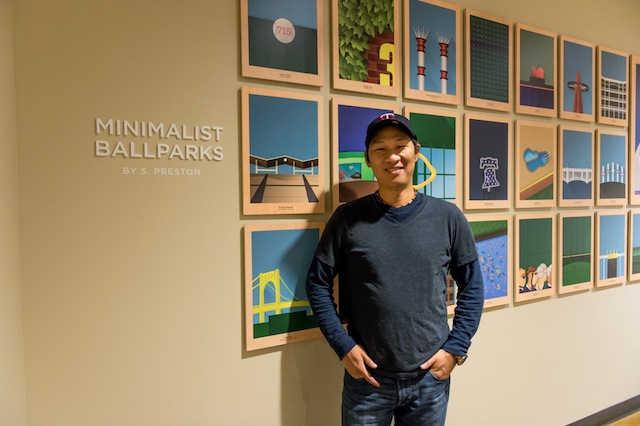 Preston at Target Field in Minneapolis

“It just blew up from there. Christmas was great, I was in a couple of gift guides and then the next big call was probably Target Field calling to say they wanted my whole display put up in the concourse of the stadium.” While preparing the artwork, frames, files, and everything else needed to install his collection on the walls of one of his featured ballparks he got a call from Major League Baseball. “They said they wanted to bring me under their license and that they thought it would go over really well with baseball fans.”

It was at that point that Preston realized the quality of what he had produced, and it became bigger than he had ever dreamed.

“You get really worried, especially as an artist you can get really negative and apprehensive about your own stuff. You’re not sure if people will like it but it turned out to be a massive success.” He was soon invited to set up a booth at the MLB All Star game this year, which was also happening in Minneapolis.

“I finally kind of have an idea of what I have now. I do have art and I have something that people immediately connect to. It’s sublime and subtle. It really just hits home.”

“People who saw the display in Target Field were able to come to me at the All Star game, see the artist, meet the artist, and buy their print from me and get it signed. That was the coolest thing. The stars aligned.”

During the All Star FanFest he met fans of all ages who appreciated the way that his artwork made them feel. He even had a fan come up to him and admit that he missed the first three inning of the game looking at his art in the concourse.

Preston also met a teenage girl who had just completed a stadium pilgrimage, visiting 30 stadiums in the last 30 days. “They’re buying one of each, one for every stadium that they go to and they just ask me to sign the date they visited.”

Right now his designs are the very first stop on the tours given at Target Field and he’s also had a math teacher tell him he uses his work as a teaching tool with his students, based on its minimalist expression. He said it connects to people on many levels. First as a guessing game, then on a personal level, but also as living room-worthy art.

[Editor's Note: I have to admit that I was never a fan of baseball until John and I watched all 10 innings of Ken Burns' Baseball documentary through the course of a rainy summer in Vancouver. It wasn't the actual sport that I came to appreciate, it was the history, which is one of the reasons why the Vancouver Canadians are so endearing.

Watching the documentary, memories flooded back as I remembered playing ball in a dirt field in Fort Langley and I recalled all of my favourite baseball movies, the ones that really made me feel something. I then read BC author W.P. Kinsella's Shoeless Joe because I wanted to connect to the story upon which the film Field of Dreams was based. In recent years I also played catch with John at the Field of Dreams movie site in Iowa, near where he grew up. Then, Preston's minimalist version of Fenway Park, with the Citgo sign peeking over the Green Monster, made me think of the year I spent in Boston.]

Preston told me that the idea for the series actually started with Boston. “I always has this vision of the Citgo sign and the Green Monster. That one to me is truly minimalist. It’s truly abstract and minimalist, and it hits that mark. If you get it, you get it. If you’re not a fan you don’t understand.” 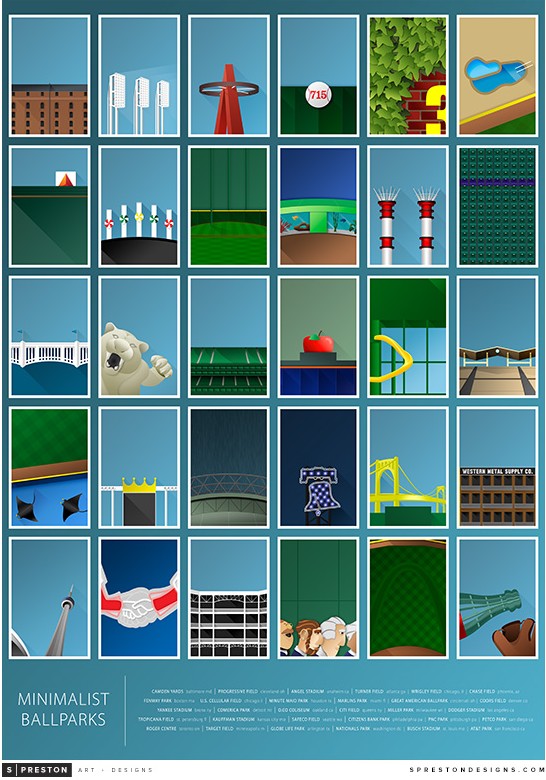 Click to view all and to purchase a print

The hardest for him to complete was Nationals Park in Washington, D.C. as the trigger image really has nothing to do with the stadium itself. “I went on Twitter and people said the president races are such a memorable part of the stadium experience so I decided I would do that.”

Going forward, he will continue to develop other minimalist graphic series and I’m not-so-secretly hoping a new Miss604.com header will make its way onto his “To Do” list. He actually designed the current version of this fair website’s main banner a few years ago and was the first to make a digital, minimalist version of the new BC Place when it reopened in 2011.

Preston has offered up a 13×19 print for one lucky reader who will be able to select any ballpark they desire. Here’s how you can enter to win:

Update The winner is Mandeep!

Share86
Tweet
Share9
Pin
Email
Reddit
WhatsApp
95 Shares
Current Contests on Miss604
*All contests are open to residents of Canada only, unless otherwise stated. Contest timelines are published on each individual post along with entry methods. Some contests may only be open to those 19 years of age and older. Winners are announced on the contest blog posts. Contest policy »

Also on Miss604.com
« Late Summer at Whistler Blackcomb
Archive Photos of the Day: Dal Richards at the PNE »