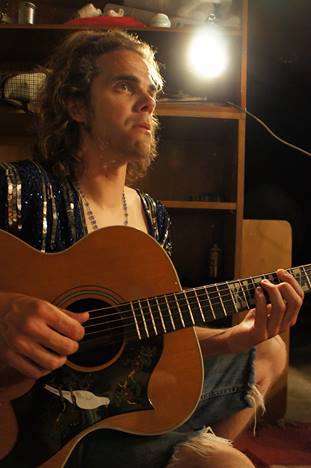 Mark Kleiner could write the definitive guide to being in a indie glam rock band in Vancouver in the 1990s and it would be something far more insightful and entertaining than a BuzzFeed-esque mega list with animated GIFs — although his bright orange Wally’s Burgers t-shirt would have to make an appearance.

His band, the Mark Kleiner Power Trio, is playing its first live show in 12 years in Vancouver next week. Along with drummer Kurt Dahle (New Pornographers, Neko Case) and bassist Pete Mills (Flash Bastard), the trio will rock a selection from their 2002 album Love to Night, some new songs, and tunes from Mark’s 90s Vancouver-based bands Jungle and Sister Lovers.

This week I called Mark in his hometown of Biggar, Saskatchewan, a small town of about 2,500 people outside of Saskatoon where he has been serving two congregations as an ordained Lutheran minister for the last three years serving PALS (Presbyterians Anglicans & Lutherans in Service). We talked about his career, music, many facets of living in Vancouver, and coffee.

“I still love rock and roll, and I probably do more music now than I ever did.” Mark, who describes himself as a father, minister, and musician, says that all of these roles cross-pollinate. “I love music and I had a fallow period of close to a decade and you know, which is actually been nice because now I just have a different relationship to it and I’m just really excited to share the new material.”

While he hasn’t yet been working in the studio, he has been writing and recording will come next. “I’ve just been raising kids, getting a degree, and doing a lot of other things. I’m looking forward to getting back at ‘er and sharing the music.”

“Mavis Staples said people talk about ‘the devil’s music’. She said ‘the devil doesn’t have any music’ and I like that.”

It seems like a pretty big leap to go from opening for bands like Mötley Crüe to leading church service every Sunday but Mark finds parallels in his professions, that both involve his unwavering love of music.

Mark credits the power of music as being a connective force for him over the years, allowing him to stay in touch with friends he met in Vancouver when he made his way out here in the 1990s, and even leading to our conversation.

When he gets back to town within the next few days he has plans to meet up with old colleagues and to visit his favourite coffee shop, Gene Cafe on Main Street, for which he’s even writing a song called Slang for Gene. “Gene is where time gets lost and the day gets found, and I love being there.”

“I’m on the orange handle now cause I really blew out my system on East Vancouver coffee back in the day so now I have to resort to decaf, and they have the best decaf Americano in the world at Gene.” He told me he knew their secret ingredient, revealing that it’s probably caffeine. He laughed and shared a great Vancouver coffee story:

Another Vancouver institution close to Mark’s heart is Wally’s Burgers, which used to be on Kingsway as well as a lineup of independent record stores like Red Cat and Zulu. Other than that he’ll check out their venue, Fox Cabaret, and find a place where he can read some local zines.

“Vancouver is such a physically attractive place that it attracts so many people, but also people who are running and looking for something else. It bears a lot of the advantages and challenges of being that place.”

“I share a lot of artists’ concerns with how global capital is really making Vancouver’s affordability out of reach for so many people and yet when I go back there’s a resiliency that I witness in the city. People do find ways to endure and I just really hope that the arts community in Vancouver can continue, because it is threatened by the cost of living. The health of a city is really measured by what would be called its biodiversity in nature but in this city it’s more like economic diversity. Having people of many different earning levels being able to co-exist and to live in the same postal code.”

While Commercial Drive and Mount Pleasant tend to be his epicentre on every visit, Mark also wants to stop by Cherry Grove in Coal Harbour, which is said to be the world’s first AIDS memorial. Back in 1985, three cherry tree were planted across from the Vancouver Rowing Club to commemorate friends and family who died of AIDS. Mark informed me that the Vancouver Park Board recently approved a plaque to be installed about this memorial for which he’s also written a song. 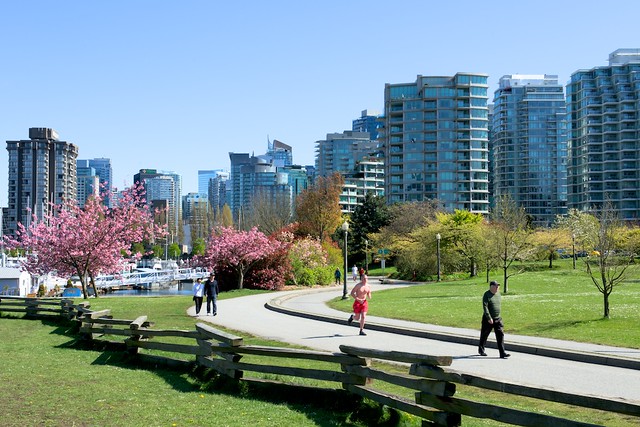 Cherry Grove on the left of this image. Photo credit: Rikki / Julius Reque on Flickr

Although only Kurt lives in Vancouver now, Mark says this is the city that spawned them as a group. “As of late I’ve really started to write more literally about [Vancouver] and about how it kind of lives in my heart. I’m really excited to come back, reconnect with Kurt and Pete, and play the show and we’ll do some old songs, we’ll do some new songs, we’ll do some covers, basically we’ll celebrate what we do and hopefully raise some money for refugee relief at the same time.”

The Mark Kleiner Power Trio will play the Fox Cabaret (2321 Main Street) on Friday, August 15, 2014 with guests Zed Dreppelin at 7:00pm (early show). Tickets are available for $12 in advance from Red Cat and Zulu Records. All proceeds from the evening go towards Syrian refugee relief.