Transit Shapes Your Region and Helps to Make it More Livable

Transit has played an important role in how the communities of Metro Vancouver have been designed.

Starting with the arrival of the railroad in Vancouver in the late 1800s. In the early 1900s street cars and the interurban lines later connected New Westminster, Vancouver, Steveston, Karrisdale and Chilliwack helping to fuel the growth of those communities. 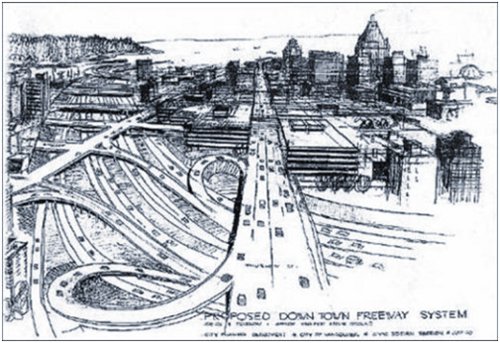 In 1945, a Regional Growth Strategy was developed. In that strategy was a Regional Transportation Investment Plan for transit. This plan helping the region grow, Vancouver in particular, which had only a few buildings over ten stories high at the time.

The Regional Growth Strategy was updated in the 1970s. This update brought a prohibition on the expansion of highways into the city of Vancouver. Transit was seen as way to facilitate the growth of the region.

Expanding the transit system has meant billions of dollars in private investment around SkyTrain stations. Take a look at this video showing transit focused developments along SkyTrain since 1985.

Much of the success of communities situated next to SkyTrain stations is because of what are know as Transit-Oriented Developments or TODs. TODs are communities that focus on making transit accessible to everyone. These communities promote more walking and cycling than communities without good access to transit, resulting in lower levels of automobile use and greenhouse gas emissions.

TODs are communities that connect to the Frequent Transit Network (FTN). The FTN provides transit every fifteen minutes in the morning until 9:00pm. seven days a week. Combine the FTN with the fact that nearly 90% of all residents in the region live within walking distance of bus service, and more people benefit from transit.

A good example of a TOD connected to rapid transit in Metro Vancouver is Plaza 88 at New Westminster Station. Integrated with the SkyTrain, residents of the four residential towers have easy access to businesses and shopping as well as walking and cycling.

Together with TransLink’s Major Road Network, five bridges, and cycling options, frequent and accessible transit is just one way TransLink is helping to shape a livable region.

Share7
Tweet
Share2
Pin3
Email
Reddit
WhatsApp
12 Shares
Current Contests on Miss604
*All contests are open to residents of Canada only, unless otherwise stated. Contest timelines are published on each individual post along with entry methods. Some contests may only be open to those 19 years of age and older. Winners are announced on the contest blog posts. Contest policy »
Comments are closed on this post
Advertisement