The Jessie Richardson Theatre Awards (“The Jessies”) are being handed out in Vancouver tonight in a ceremony and reception at the Commodore Ballroom. Miss604 is once again the proud social media sponsor of this event, honouring the very best in local theatre, and I’ll have live coverage and photos available throughout the night. If you would like to follow along on social media, use the tag #Jessies14. 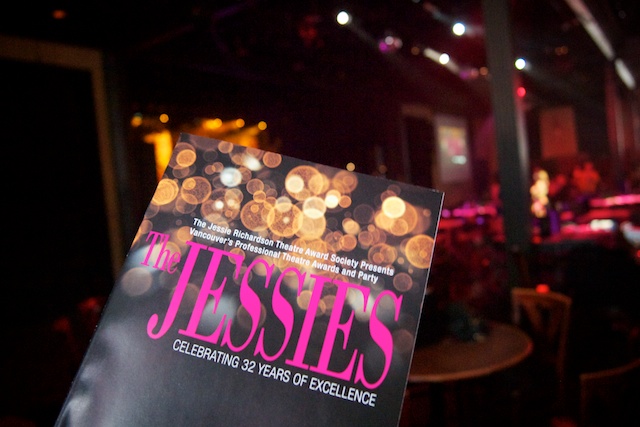 The evening’s program begins promptly at about 6:40pm with an opening from Vancouver TheatreSports who has produced and directed The Jessies for the last couple of years. Updates to follow…

Looking forward to an evening of fellowship, friendship & overdue catch-ups at the @JessieAwards tonight! And beer. That'll be good too.

Love to our friends & clients at the @JessieAwards tonight! Would it be cheesy to say you're already all winners in our eyes? #doingitanyway

The opening musical number presents “Jessie Game Night” with a montage of game show themes introducing all of the nominated companies. For Family Feud, host Josh Epstein (now on stage in SPAMALOT) says there’s Bill (Millerd, Arts Club) and Christopher (Gaze, Bard on the Beach) whose productions are nominated in the double digits tonight.

@JessieAwards Have a wonderful time tonight celebrating #Vancouvertheatre Congratulations to all the nominees! #theatre #vancity #jessies14

Once the number wraps, we’re told that acceptance speeches will have a time limit tonight (this is followed by applause) as many recipients have joyfully carried on over the years.

Andrea Lowen, President of the Jesise Richardson Theatre Society then officially welcomes us all to the awards ceremony this year. She also says that this year there were changes in guidelines that differentiate the “Large” and “Small” theatre categories, and that there’s a new category premiering to award excellence in a musical production.

THEATRE FOR YOUNG AUDIENCES
Significant Artistic Achievement
(Outstanding body of work)
Recipient: Drew Facey
Quote: “I’d like to thank Carousel for the opportunity to design Busytown with them.”

It’s time for a quick interlude that includes fictional apps for those in the theatre biz. The first is “Bitter” for reviews, then Faceybook (playing on Drew Facey’s number of nominations tonight) where you can “become Faceybook Friends to see who else was overlooked in design!” The last one is “Techr” a dating app for all those who work long nights behind the scenes. 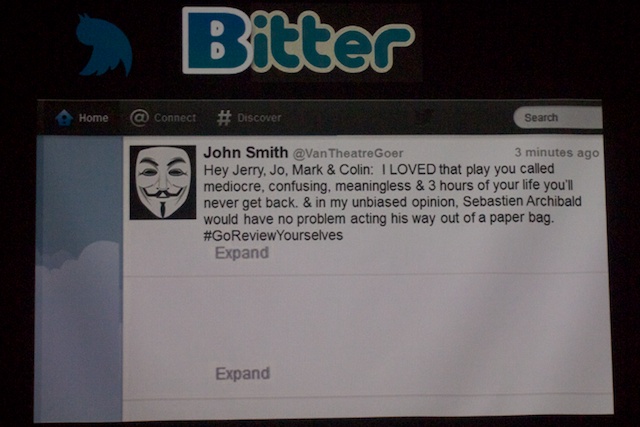 It’s time for the next award, the Mary Phillips Prize, and the presenters introduce it by saying “publicists are unsung heroes.” The recipient this year is Bonnie Allen, whom I’ve had the pleasure of working with on many occasions and she’s also the reason I’ve been the social media sponsor of the Jessies for the last few years. Way to go Bonnie! 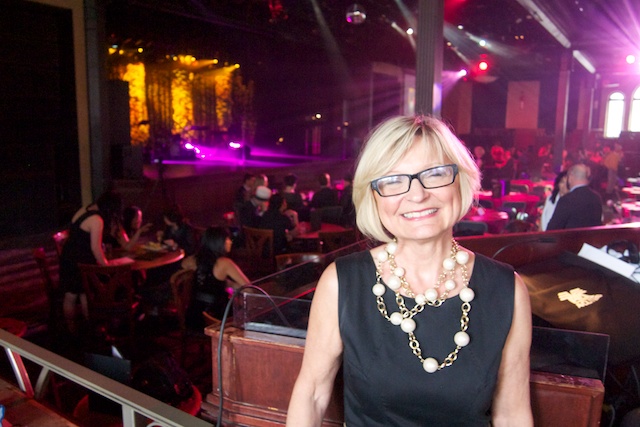 “She’s a highly skilled, incredibly knowledgeable, and extremely discreet individual who has had our backs for a long time.”

Next is Carl Michal to present the award in his father’s name. Ray Michal was the founding artistic director at City Stage which was once housed in a donut shop on Howe. Michal also brought theatre sports in Vancouver, among his vast commitment to the arts, its history, and legacy in Vancouver. The recipient is Brian Cochrane.

Now for a quick sketch including a round of the “Match Game” with artistic directors and two participants from the audience (@seanholiver and Adrian). The first match question is: “The Jessie jury member said that small theatre productions are getting so small, the last one I saw was performed in a BLANK”. The audience participant said CLOSET and the only artistic director to match is Christopher Gaze saying, “it’s always important to come out of something so…” and they have a match!

The Sydney Risk Prize for Outstanding Original Script by an Emerging Playwright is presented by Risk’s nephew who says: “We are trying to encourage young people to make theatre a career choice as professionals.” The recipient is Billy Marchenski.

SMALL THEATRE
Outstanding Performance by an Actress in a Supporting Role
Recipient: Meaghan Chenosky for Killer Joe — ITSAZOO Theatre Productions
Quote: “When I first moved here I was terrified — it was so big and I was scared but as I worked I realized that everybody’s just happy to see everybody succeed.”

LARGE THEATRE
Outstanding Performance by an Actress in a Supporting Role
Recipient: Erla Faye Forsyth for The Foreigner — Pacific Theatre
Quote: “Well done all of you for your courage to commit to this profession in a culture where it’s getting a little bit difficult to do so.”

SMALL THEATRE
Outstanding Performance by an Actor in a Supporting Role
Recipient: Alec Willows for Of Mice and Men — Hardline Productions

Alec Willows: "I seriously want to thank the Jessie committee for coming to see it." sometimes it's the little things. #Jessies2014

LARGE THEATRE
Outstanding Performance by an Actor in a Supporting Role
Recipient: Peter Carlone for The Foreigner — PacificTheatre
Quote: Well, it was pretty much all of Matthew McConaughey’s exact Oscars acceptance speech!

The Patron of the Arts Award
Recipient: Darlene Howard
“We chose to give, what little my husband and I have, to eduction, arts, and our community.”

“Well, it’s not over yet. I love the theatre, and I know you do too. And I invest everything I have in the theatre, all my passion and love. I try to reserve what I can for my family and balance my life and that seems to be the great challenge for all of us in the theatre. But I am so grateful to my mother and my father who gave me everything. Who forgave me for not going into the family business, and when I said I wanted to be an actor they just supported [me].”

“I said to my father as we drove over the [Cambie] bridge. Dad you must be awfully disappointed in me… …He said ‘my dear boy, you are doing what you want to do. I had to go to the war and fight. Then I had to come back and get a job and have a family and make something of my life. But you’ve done what you wanted to do. You’ve followed your passion.’ He never knew anything of Bard on the Beach. But my mother does and she came over nine years ago.”

“I can only do what I do because when I come home at night Jennifer is there to kiss me and to love me and to tell me I”m alright and that what we’re doing is making Vancouver and Canada a better place.”

Outstanding Original Script
Recipient: Jason Rothery for Inside the Seed — Up in the Air Theatre

SMALL THEATRE
Outstanding Direction
Recipient: Richard Wolfe for Inside the Seed — Up in the Air Theatre

LARGE THEATRE
Outstanding Performance by an Actor in a Lead Role
Recipient: John Voth for The Foreigner — Pacific Theatre

SMALL THEATRE
Outstanding Performance by an Actor in a Lead Role
Recipient: Bob Frazer for Whose Life Is It Anyway? — Realwheels Theatre

LARGE THEATRE
Outstanding Performance by an Actress in a Lead Role
Recipient: Colleen Wheeler for Elizabeth Rex — Bard on the Beach

The band is back! @joshepstein1 doing a version of Happy by Pharrell. #jessies14 pic.twitter.com/uGa1Qlhd1t

Share41
Tweet
Share
Pin
Email
Reddit
WhatsApp
41 Shares
Current Contests on Miss604
*All contests are open to residents of Canada only, unless otherwise stated. Contest timelines are published on each individual post along with entry methods. Some contests may only be open to those 19 years of age and older. Winners are announced on the contest blog posts. Contest policy »
Comments are closed on this post
Advertisement