Seven months ago I spent the night outside, in a back alley off Pender Street, with a sleeping bag on top of a piece of flattened cardboard. The sky was clear and the moon glowed as bright as the Harbour Centre lookout that I could see across the street. I slept about 30 minutes between sundown and sunrise. It was uncomfortable, bone-chillingly cold, and miserable… but it was also for a cause. 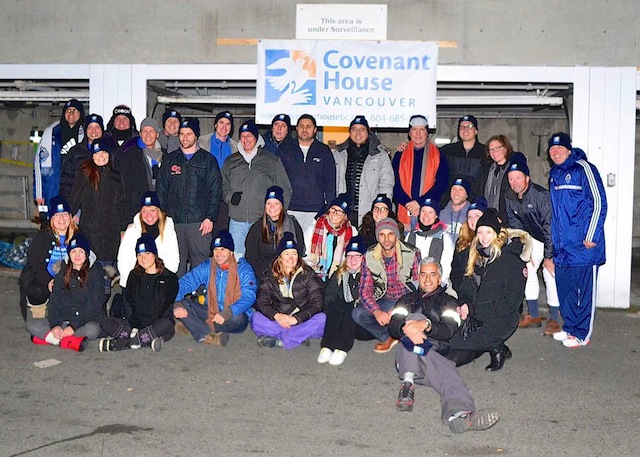 A group of local business leaders and media personalities took part in the annual Covenant House Sleep Out to raise funds and show support for the youth of Vancouver, some who end up sleeping on the street without the comforts of a sleeping bag and a flattened piece of cardboard.

Covenant House Vancouver exists for those young people for whom there is often no one else – young people who have either willingly fled physical, emotional and/or sexual abuse or those who have been forced from their homes. We understand that life changes are challenging and do everything in our power to ensure that young people succeed at whatever plan they have chosen for themselves. As long as genuine effort is demonstrated, so is our commitment.

We met a few Covenant House youth during our campaign and they all thought we were nuts, since we were doing this by choice. One even went to her room and brought down her own blankets, from her own bed, to cover us. This is the culture of caring that you will find at Covenant House.

The sleepout also gave us all the opportunity to learn more about Covenant House and its various levels of care such as the Crisis Shelter, Drop in Centre, Street Outreach, and Rights of Passage.

This month, The Robert L. Conconi Foundation is going to match every donation Covenant House receives up to $150,000 so the impact of any donations received will be double throughout June 2014.

Bob Conconi is a self-made businessman who attributes much of his success to the stable upbringing and supportive family that allowed him to pursue his interest in business. As a father, Bob has a lot of empathy for the challenges faced by homeless and at-risk youth, and is honoured to be able to support Covenant House Vancouver. Bob and his family believe that the services and supports Covenant House provides young people give them the opportunity to develop into outstanding members of our community. Bob and his wife Diane founded The Robert L. Conconi Foundation in 2003 with the goal of helping others and creating opportunities for communities.

If you would like to support Covenant House, now is a great time as a gift of $25 instantly becomes $50 when you donate online. Follow Covenant House on Twitter and Facebook to learn more about their work in Vancouver and I’ll see you again in November when I do my second Covenant House Sleepout.

Also on Miss604.com
« Vancouver Websites Years Ago
Things to do in Vancouver This Weekend »