Canada is gearing up to host FIFA Women’s World Cup Soccer in 2015 and leading up to the tournament our Canada Women’s National Team will engage in several international matches on home soil this season. The next game is Canada vs Germany in Vancouver on Wednesday, June 18, 2014 at BC Place. 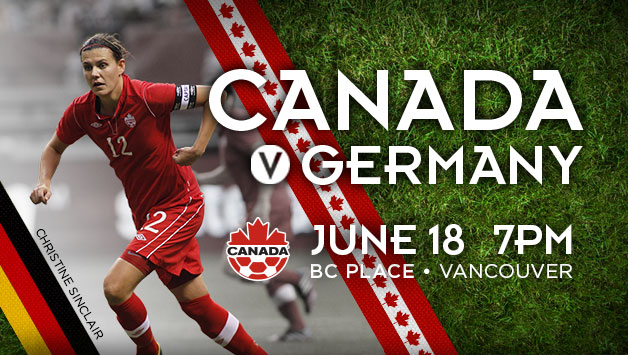 “To ensure Canada’s Women’s National Team offers consistent, world-class performances, Canada Soccer believes that it must play against quality opponents more often, and play at home on a regular basis,” said Victor Montagliani, President of Canada Soccer. “Vancouver has demonstrated its enthusiasm towards the beautiful game and we are thrilled to bring some of the fiercest opponents international women’s soccer can offer so that our Women’s National Team can experience the support of their home fans again on the road to Canada 2015.”

If you wish to sit specifically in the supporters’ section (249 at BC Place) you can make that selection at time of ticket purchase online. In addition, purchasers of tickets for the Canada’s Women’s National Team matches in Vancouver will be offered a special opportunity to opt-in to a Priority Access list to purchase venue packs for the FIFA Women’s World Cup Canada 2015™ matches at BC Place when the packs go on sale.

Thanks to Canada Soccer, I have a 4-pack of tickets to the match against Germany on June 18th plus 4 t-shirts to give away to one lucky Miss604 reader. Here’s how you can enter to win:

I will draw one winner at random from all entries at 12:00pm on Friday, June 13, 2014. Follow Canada Women’s National Team soccer updates on Facebook and Twitter with tag #CANWNT.

The team will also play Japan on Saturday, October 25th at Commonwealth Stadium, Edmonton and Tuesday, October 28th back at BC Place in Vancouver. All Canada WNT home matches this year will be broadcast live nationally on Sportsnet.