We recently heard from some Midwest travellers who visited Vancouver this spring and it was fascinating to hear them remark not on the mountains and the ocean, of which locals are so proud, but our architecture. In particular, the brilliant glass along False Creek and Coal Harbour that has been forming like crystals since the early 1990s. Vancouver’s building history plays a large part in the story of our city, from the tallest buildings in the British Empire to repurposed residential towers. One local has even taken to Instagram to tell the story of Vancouver’s building history like no other. 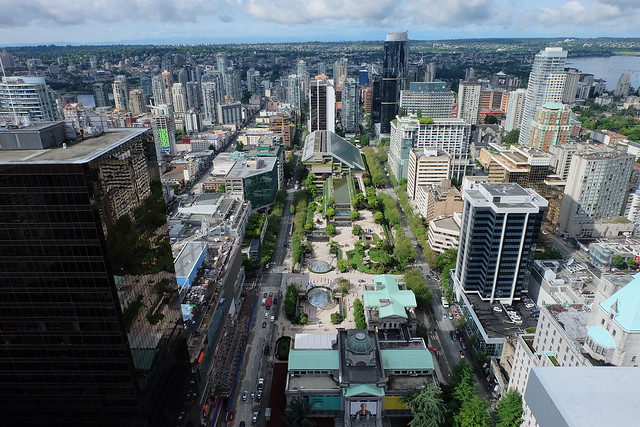 “I started this series because of The Electra,” Scott Graham of WFLBC told me. “I feel like most Vancouverites don’t know how old it is or that is used to be the headquarters of BC Electric. When I started searching the Vancouver Archives I found so many cool pictures of other buildings that I decided to make it a series.”

Scott has been posting photos of buildings in the downtown core, from unique and often elevated perspectives, for several months on his Instagram feed. He adds informative captions and will also post “then and now” comparisons using images from the City of Vancouver Archives‘ database.

In May of this year, four years after his WFLBC (“What’s For Lunch BC”) blog began in May of 2010, Scott shared a roundup of some of his Instagram features in a blog post, shifting the focus from food to a new passion.

“I wrote about food and beer for a long time, and I still do, but I find both scenes are becoming a little stale and over saturated. Every new restaurant is the same and of all the new breweries in town there’s only 2 or 3 that are really outstanding.”

To Scott, architecture and history are timeless, and as subject matter they come with less pressure since they are a personal passion and not a driving force for blog statistics and freebies offered by companies. “Talking about history and buildings isn’t about getting things, it’s about sharing something, bringing attention to parts of Vancouver’s past that are long forgotten.”

Of all the towers that dot the Downtown Vancouver landscape, there are a few that Scott will feature more frequently than others. “I’ve learned so much about some of my favourite buildings through this series. My favourites have been the Marine Building. The Old Stock Exchange, The Qube, and of course The Electra.”