Vancouver is for the birds! Not only is our city’s location a major stop along the international Pacific Flyway migratory route, but Vancouver also leads Canada when it comes to celebrating our feathered friends.

Today is the last day of Vancouver Bird Week, which saw exciting events, presentations, workshops, art exhibits at the Roundhouse and Hillcrest Community Centres, and walks all over the city to celebrate the fantastic variety of birds we have here.

Because of its unique mixture of coastal habitats and lush forests, our city is a haven for both weary migrants and birds that live in the region year-round.

Stanley Park Ecology Society (SPES) played a big part in this year’s celebrations, hosting four events during the week that were all FREE to the public — everything birdy, from eagles, to art and even taxidermy.

There is one free presentation left today at the Central Library — Saturday, May 10th at 7:00pm: Why Birds are Important with author, biologist, and birder, Dick Cannings. The announcement of Vancouver City Bird will also be made. Seating is limited so get there early.

Also today, there will be walks all over Vancouver Parks organized by Nature Vancouver. Come and join walk leaders in a park near you and learn more about birds in your neighbourhood with local bird experts on this World Migratory Bird Day, the inspiration for Vancouver’s Bird Week.

Bird Week gave you the chance to vote for one bird to be honoured as Vancouver’s City Bird and there’s still time to get your vote in. Which is your favourite? Cast your vote by end of day today! The six nominees are:

Anna’s Hummingbird
Despite being tiny, these beautiful birds stay around all year long even through the Vancouver winter. The male has beautiful pink feathers around his face and despite his small size is fearless.

Black-capped Chickadee
The cute black-capped chickadee is one of the most visible Vancouver birds but also one of the most fun. Chickadees love to feed in social groups and are also very happy to use artificial feeders. You can find them in the forest or around urban gardens throughout the year. 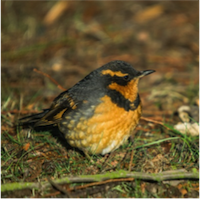 Varied Thrush
In the city the varied thrush is normally only seen during the winter. Once spring arrives they head up into the mountains to breed. Although they can be shy, their orange and grey plumage is beautiful at any time of year.

Pileated Woodpecker
The pileated woodpecker is the largest woodpecker in North America and one of the most spectacular. It lives in Vancouver’s mature forests and the holes it drills in the trees provide homes and nests for many other bird species.

Northern Flicker
The flicker gets its name from its habit of flicking its bill. Although it’s a woodpecker it actually does most of its feeding on the ground. It’s very partial to ants and other insects. Look for them on your lawns in the morning.

Pacific Wren
The Pacific wren is a tiny bird with a big voice. A resident of shady forests it weighs only about 10 grams but is one of the most vocal birds in the forest. The Pacific wren was only declared a species in 2010, when scientists decided that it was separate from the winter wren.

Even if you didn’t make it to our Bird Week events, May is the perfect month to discover Vancouver’s birds. It’s migration season and many birds arrive now to spend the summer in Stanley Park to breed before heading off to winter in warmer weather. Others just stop off in the park to feed during migration.

One of the most incredible migrants is the rufous hummingbird, which arrives in Stanley Park during April and May.

It’s small, even for a hummingbird: only 8 cm long and even more incredibly it weighs less than 5 grams. But this tiny bird migrates more than 2500 miles twice a year across the whole of North America to its winter home in Mexico—an amazing journey for such a tiny bird. In the summer the rufous hummingbird can be seen feeding at flowers in the Park. The Rose Garden opposite the Stanley Park Pavilion is always a good place to look for hummingbirds.

Some of the other special birds that spend the summer in Canada are the warblers: species like Wilson’s warbler, Townsend’s warbler and yellow warbler. Most of our warblers are bright yellow with some black or white markings, making them some of the most attractive summer visitors to Vancouver.

So whatever else you do this May, take time to look up and enjoy the beauty of our birds.

Also on Miss604.com
« Things to do in Vancouver This Weekend
Surrey Children’s Festival 2014 »