Nominees for the 32nd annual Jessie Richardson Theatre Awards (“The Jessies”) have just been announced and winners will be awarded at a ceremony on Monday, June 23, 2014 at the Commodore Ballroom. The list of nominees reflects a full year of excellence in local theatre, showing appreciation for everything from costume and lighting design to performances on stages large, small, and for young audiences. 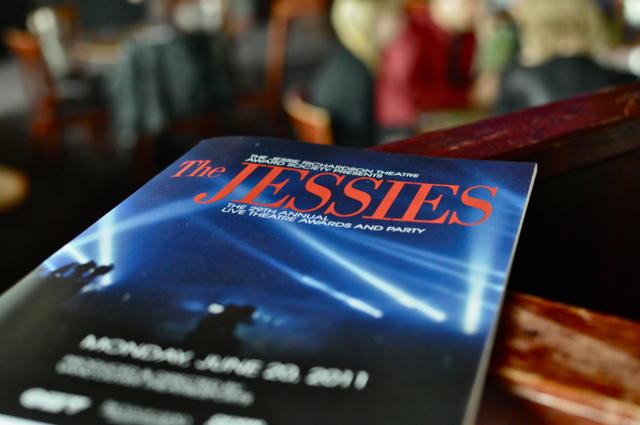 The awards are divided into three categories: Large Theatre, Small Theatre, and Theatre for Young Audiences. Also included are the Significant Achievement Award and other special awards that comprise the Jessies. Here’s the rundown courtesy of the Jessie Richardson Theatre Awards:

In the Large Theatre category there were a total of nine theatre companies whose productions were nominated; from that group four companies garnered the highest number of nominations. Leading the group is Bard on the Beach Shakespeare Festival with a total of 15 nominations from their 4 productions. Hamlet received the most with a total of 5 nominations that includes actor Jonathon Young receiving two nominations – one for Outstanding Lead Actor in Hamlet and the other for Supporting Actor in Twelfth Night.

Drew Facey received an impressive 7 nominations, the most by a single individual. He received four out of the five nominations in Outstanding Set Design in the Large Theatre category and in the Small Theatre Category he earned one for Set Design and two for Costume Design.

Under the Theatre for Young Audiences category, Carousel Theatre for Young People garnered a total of 10 nominations with six going to Busytown and three to Wondrous Tales of Old Japan. Théâtre La Seizième’s production of Extra Celeste and Presentation House Theatre’s Jack and the Bean both garnered four nominations.

Some of the most touching moments of the Jessie Awards ceremony come with the special awards. These not only honour very deserving, distinguished, and up-and-coming members of the industry, but I have personally learned so much about the history of theatre in Vancouver thanks to the namesakes of these awards and their recipients. The special awards include: The Georgia Straight Patron of the Arts Award, the Mary Phillips Award for Behind the Scenes Achievement, the Ray Michal Prize for Emerging Director, the Sam Payne Award for the Most Promising Newcomer, the John Moffat & Larry Lillo Award, the Colin Campbell Award for Excellence in Technical Theatre, the Critics Choice Innovation Award, and the GVPTA Career Achievement Award. Tickets for the Jessies are now on sale for $29.50 (plus service charges) through Ticketmaster online or by phone 1-855-985-5000. Doors are at 5:30pm on Monday, June 23rd with the ceremony beginning at 6:30pm. Even if you aren’t a member of the industry, it’s a thoroughly entertaining evening and one of my favourite theatre-related events of the year thanks to the Vancouver TheatreSports who puts on the show.

Miss604.com is the proud Social Media Sponsor of the Jessie Awards.
Current Contests on Miss604
*All contests are open to residents of Canada only, unless otherwise stated. Contest timelines are published on each individual post along with entry methods. Some contests may only be open to those 19 years of age and older. Winners are announced on the contest blog posts. Contest policy »
Comments are closed on this post
Advertisement