Governor Jay Inslee declared Friday, March 21, 2014 “We Day in Washington” while he stood on a stage at Key Arena in front of 15,000 students who were exclusively invited to this incredible celebration called We Day Seattle. We Day is a production of Free The Children, and it inspires, engages, and empowers youth to lead through service in their schools and communities. By committing to take action on at least one local and one global initiative of their choice, as a part of a year-long educational program called We Act, youth can earn their way into We Day events in Alberta, Atlantic Canada, California, Manitoba, Minnesota, Montreal, National We Day (Canada), Saskatchewan, Seattle, Toronto, Vancouver, Waterloo Region, and We Day UK.

130,000 students across Washington State, in a half of all school districts in the state, took part in We Acts over the last year.

Since 2007, youth involved in We Act have: Raised over $37 million for 1,000 causes, volunteered 9.6 million hours, collected 4 million pounds of food for local food banks, and logged 7.5 million hours of silence to take a stand for children in developing communities who are denied their rights.

I have been attending We Day in Vancouver since 2009 and in 2012 I started bringing my niece. What I truly believe is that everyone, no matter who you are, can help make a difference in their community — and that’s the We Day message. At We Day you hear of amazing fundraising and volunteer acts but nothing is too small. From helping to educate others, to hosting a food drive at your hockey game or donating used clothing, to taking part in campaigns like We Are Silent, We Stand Together, We Create Change coin drive, We Scare Hunger at Halloween, or We Are Love Valentine’s.

Each We Day is special, not only because the celebrity guests and speakers on the stage vary from city to city, but the students in the audience have each achieved something different to receive their invitation. Coach Pete Carroll of the Super Bowl Champion Seattle Seahawks said in a pre-event press conference that while his team is world champs, they will be on that stage looking out at the students in Key Arena thinking that all those kids are in fact champions — champions of each of the causes they took part in to earn their way to We Day. 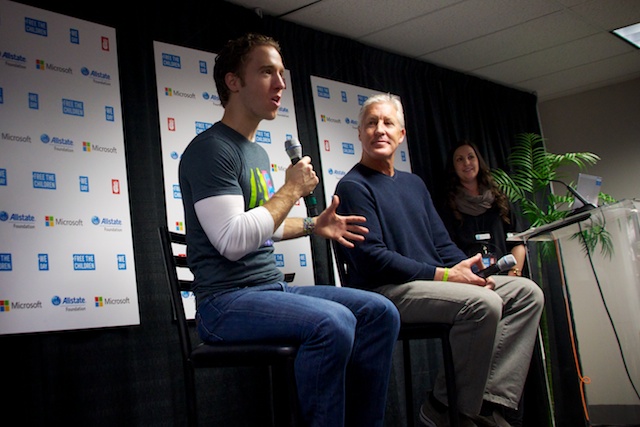 Pete Carroll is Head Coach of the Seattle Seahawks and the Co-Chair of We Day Seattle. He brought We Day to Seattle after seeing Co-Founder Craig Kielburger give a talk in Tacoma a few years ago. 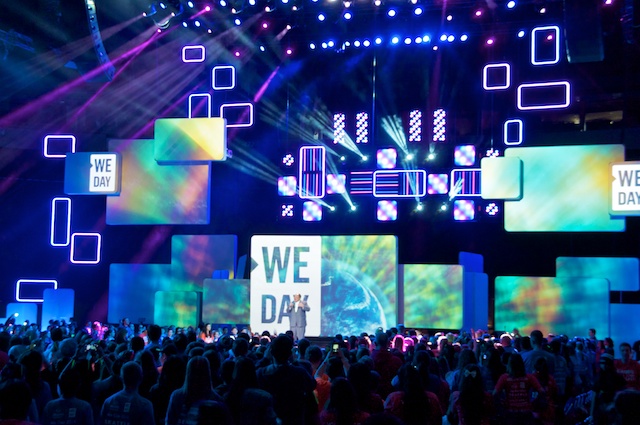 The theme of We Day this year is education what better way to kick off the event than to have Martin Luther King III come out to talk to the students about his father’s legacy. He talked about visiting Antioch College, his mother’s alma mater, where there stood a statue of Horace Mann along with a quote: “Be ashamed to die until you have won some victory for humanity.” He further explained that we can win victories in our schools, in our communities, and our world. Find your calling, do your job well, and do what you can to make the world in which you live a better place. 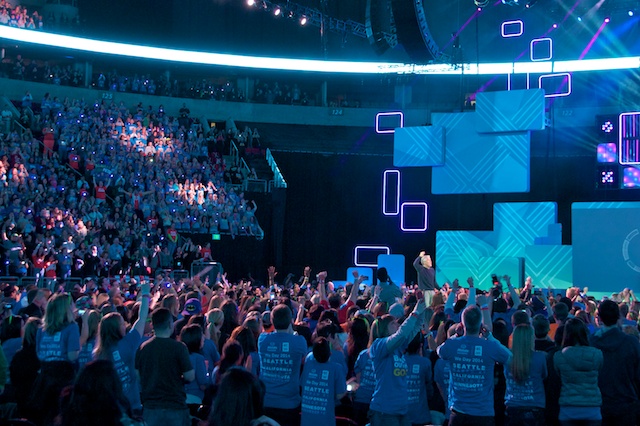 Coach Carroll gets the crowd, in the Home of the 12th Man, to attempt to become the world’s loudest We Day. He told the students that “the dream of the Super Bowl doesn’t get you anywhere, it’s understanding the method that does.” I took that as meaning you need to know what actions to take, and then carry them out. 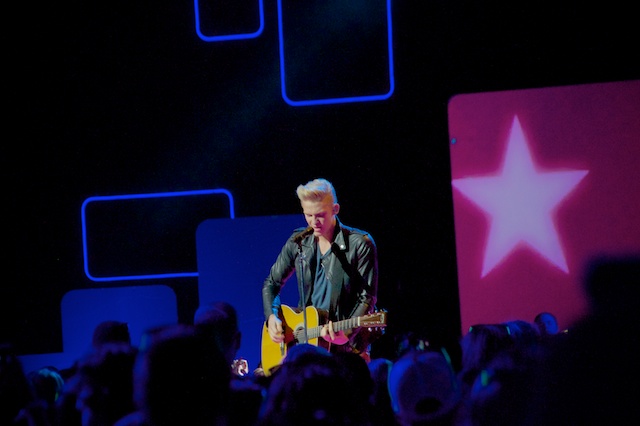 Australian pop singer and Dancing with the Stars contestant Cody Simpson performs Pretty Brown Eyes for the crowd (which all called it “PBE” on Twitter). 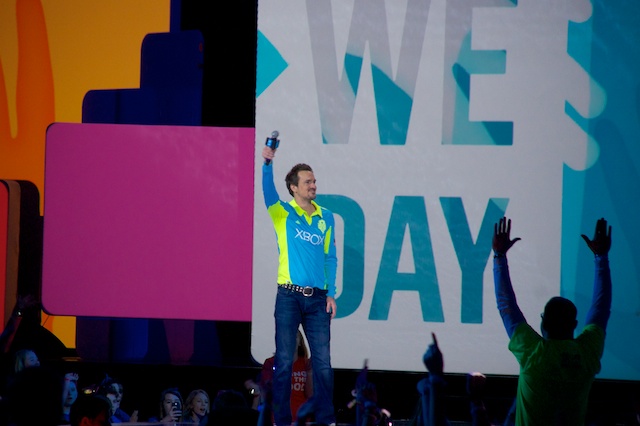 Now, I’m no Seattle Sounders FC fan, since I bleed Whitecaps FC blue and white, but I have to say that alum Roger Levesque was absolutely charming. He played in Seattle from 2003-2012 and when he retired he enrolled in the University of Washington for a master’s degree in business administration. Spencer West is a We Day rockstar. He continues to push boundaries and do amazing feats just to help out others. He’s climbed Mount Kilimanjaro and he’s even walked from Calgary to Edmonton for the causes in which he believes. “Getting involved because it’s the right thing to do isn’t enough. You have to have the ‘why’.” Of course We Day events can’t happen without generous sponsors and Microsoft had a big presence at the Seattle event. Lisa Brummel, Executive VP of Human Resources spoke to the crowd about the YouthSpark youth empowerment program. I was personally pretty excited to hear Ed Norton speak, especially in his capacity as a founder of CrowdRise, which he called the “Facebook of Philanthropy”. The movie star (Fight Club, American History X) walked onto the stage and gave a great analogy based on his love of physics when he was a student. He talked about the concept of the lever and how using that same thinking can help you pull off amazing feats. A lever is a way to increase your power, with the angle, the fulcrum, and how it increases your ability to move heavy things.

“Everybody, especially young people, feels powerless sometimes… …yet every day we are reading about or hearing about people who do incredible, inspiring things in this world.”

Norton told the students to find their lever. Go out there and find a place to stand so they can move the world. It’s pretty easy to get involved as there are so many resources for students, families, schools, and businesses available online. You can sign up for one campaign or commit to a full year of We Act. Pick a fundraiser, adopt-a-village, host a third-party event, and more. You can find everything you need on the Free the Children website.

Also on Miss604.com
« Things to do in Vancouver This Weekend
Camilo The Magician 2014 Tour »