The Vancouver St Patrick’s Day Parade will take place Sunday, March 16, 2014 at 11:00am in downtown Vancouver. As a part of CelticFest Vancouver, the 10th annual parade will be surrounded by activities and free family fun.

The Vancouver St Patrick’s Day Parade begins at Howe and Davie Streets at 11:00am and proceeds north on Howe to Georgia Street, ending at Georgia and Granville. 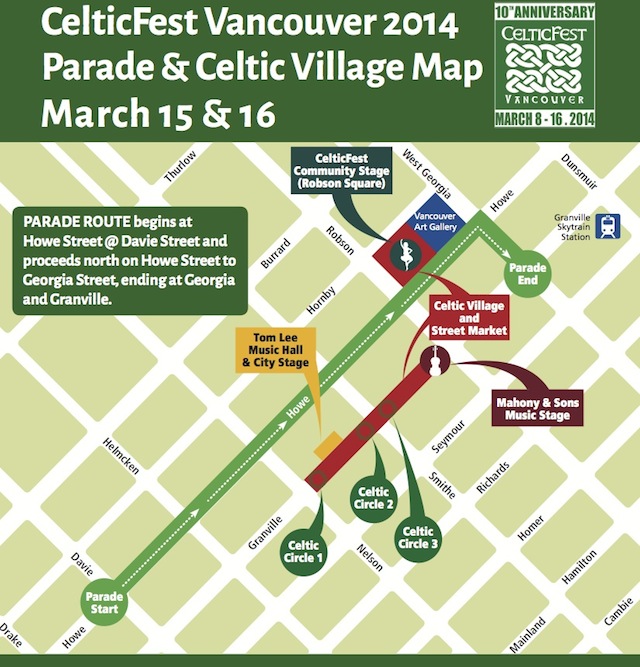 10:00am to 2:00pm
Howe Street, from Davie to Georgia; Georgia from Hornby Street to Seymour; Granville from Georgia to Pender.

After the parade, the Celtic Village and Street Market is the place to go. Located on Granville between Robson and Nelson — and in Robson Square — the Village features free concerts throughout the day from great Celtic bands at Mahony & Sons Music Stage and the CelticFest Community Stage at Robson Square. There will be community dance groups, the Penny Whistle Party, the Bohdrán Drum Circle among other great performances. The Street Market will have artisan and craft booths and food vendors. The CelticFest Workshops at Tom Lee Music will also be open.

CelticFest Program Guides are available at participating Lower Mainland Starbucks. Check out the CelticFest Passport Contest to enter to win a trip to Ireland and follow CelticFest Vancouver on Facebook and Twitter.