The highly-recommended Hotel Max in Seattle was my home for one night last week when I went down to cover We Day with my niece. This landmark hotel, originally opened in 1926, has been transformed into a rockin’ boutique hotel.

The building is a classic example of Beaux Arts Classical Eclecticism, with the distinctive characteristics of this architectural style. In 2005, Provenance transformed the Vance Hotel into the Hotel Max. Inspired by its artistic and architectural roots, the Hotel Max has become a magnet for musicians, art lovers and the creatively inclined.

I loved the location of the Hotel Max. It was about a 2 minute walk from Westlake Center where we hopped on the Seattle Monorail to get to Key Arena, the Space Needle, the EMP and the Seattle Center area. It’s also located in between two Starbucks, which was handy in the morning before we checked out and headed off to We Day.

I’ve stayed in several Seattle hotels and each usually has its own unique touches. At the Hotel Max those included a mobile number where guests could text front desk, and a funky rock and roll theme throughout the hotel, hallways, and room decor. The Get It Now menu was nice, although we didn’t use it. It featured custom pillow selections, iPod lending, pet room service, and a spiritual book menu.

As it turns out, we were staying on the Sub Pop Floor so there was also a record player and choice Sub Pop vinyl in our room. 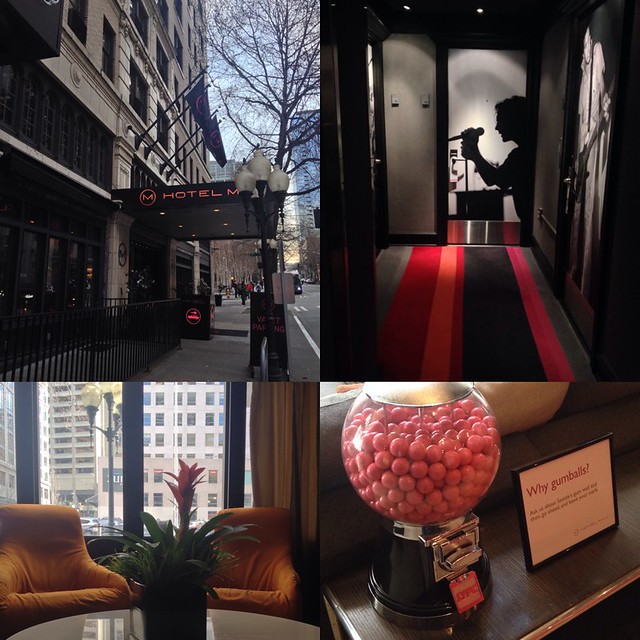 They had a complimentary gumball machine near check-in, so that you could leave your mark at the infamous Gum Wall near Pike Place Market, and the lobby also smelled like someone was burning candles that were scented to mimic fresh-baked cupcakes, which was warm and welcoming.

Arriving in the room, there was a set of earplugs on the night stand which made me wonder what noises and disruptions would keep us up at night. Aside from the regular sounds of downtown traffic, I really wasn’t phased at all and we didn’t need the earplugs.

I could have done without the strange bathroom layout (in room 520 at least). I wouldn’t have minded having a window directly in front of the toilet but when we entered the room the blinds were up and the apartment right across the other side of the roof could have really had an eyeful if I had noticed this too late. It seemed like an odd placement, sitting with a window about 1 foot from your face and dozens of apartment windows on the other side.

I also didn’t care for the bowl sink, which was exposed and had no counter at all around it. There was only a small ledge above it for soap and a toothbrush so I didn’t keep my toiletries in the bathroom.

What the Hotel Max lacked in convenient room layout, it made up for with amenities and its great location. My niece and I ended up walking back from Seattle Center, taking a long detour to make a purchase at Glazer’s Camera, and we found a Whole Foods along the way. We bought some snacks and enjoyed them in our room although the in-room dining menu looked very tempting.

The hotel is very well connected on Twitter, Facebook, and Instagram, and the staff was friendly and helpful. I would consider staying here again if I had events to attend in the Seattle Center and South Lake Union areas. Next time I would also try out Miller’s Guild located adjacent to the lobby and get my free beer.