This post has been contributed by Ben Hill, Communications Volunteer with the Stanley Park Ecology Society (“SPES”). I have been following SPES since I moved into the West End almost a decade ago and I have been a member for two years. I wanted to offer the team an opportunity to share their news, events, and work so I have created “SPES Saturday” and SPES features where they will be contributing stories with my audience once a month.

Setting Up House in Stanley Park Spring is in the air and we aren’t the only ones to notice the change in the season. The start of spring also marks the start of the nesting season for many thousands of birds in Stanley Park.

One of the Park’s most magnificent birds is also one of the first to begin nest building. Pairs of bald eagles start building or repairing their nests in February and often begin laying eggs by the end of the month. Bald eagle nests are the largest of any bird in North America; nests that have been used for many years can grow to two and a half meters across, and have been known to weigh as much as a VW beetle.

Of course most birds don’t have such large nests to return to each year or even the most suitable habitat. Stanley Park Ecology Society (SPES) has a nest box program to help out some of the birds that return to the Park to breed.

This April, keep your eyes peeled for small wooden boxes perched on poles around Lost Lagoon. These are nest boxes for tree swallows which migrate from Central America to breed in tree cavities in the north. During the summer, they can often be seen hunting insects over Lost Lagoon so it makes sense that the nest boxes are in a place with such a good source of food. 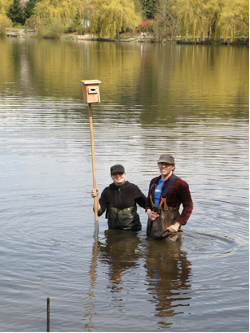 The nest boxes offer the swallows places to raise chicks that are safe from predators. To make them even more secure, SPES installed spikes on the top of each box. This stops the gulls that also live on Lost Lagoon from standing on top of the boxes and grabbing the emerging chicks.

This year SPES will be installing swallow nest boxes at four new locations on Lost Lagoon. We’ve taken great care to make sure these new locations are ideal for the birds. They are on the north shore of Lost Lagoon, facing south to get maximum light and warmth. The size of the entry hole and the height above the cavity floor are designed to exclude unwanted species such as starlings and house sparrows.

On the same day, SPES is also installing nest boxes for another bird that relies on the wetlands in the Park: the wood duck. This beautiful duck has been known to nest in tree holes around Beaver Lake; a new box will be installed on Beaver Creek, close to the lake where two nest boxes are already established. 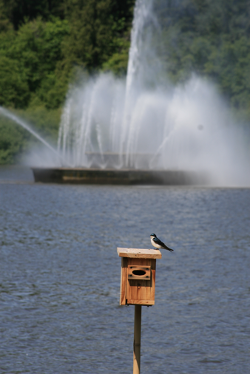 In an urban park like Stanley Park, the large rotting trees that naturally suit cavity-nesting wood ducks may pose a hazard for park visitors. The nest boxes provide wood duck habitat where suitable natural habitat does not currently survive and are a proven alternative should aging trees be removed for safety reasons.

When we think about Stanley Park, we tend to think of the great trees, but the streams, lakes and other wetland habitats are just as important to the health of the environment and its animals.

Installing nest boxes is part of the HSBC Freshwater Initiatives in Stanley Park project supporting SPES to enhance the Park’s wetlands, lakes, streams and ponds, particularly Beaver Lake, Beaver Creek and Lost Lagoon. Beaver Creek is one of only four remaining salmon streams in the City of Vancouver and therefore holds a great deal of ecological importance. With the help of a host of volunteers, SPES will be restoring the creekside vegetation in these areas and also undertaking habitat and wildlife monitoring. The habitat created by this project will be used for many years by the Park’s wildlife – and its nesting birds. 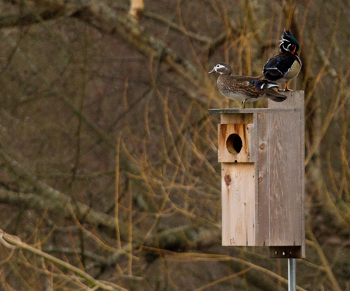 The most common swallows seen over Lost Lagoon are the barn swallows but they don’t use the nest boxes. They just feed on the insects over the water. Barn swallows once nested on cliffs and in caves throughout North America, but now build their nests almost exclusively on human-made structures.

Also on Miss604.com
« 40 Years of Vancouver Whitecaps History
#findyourfit Spotlight on BC Careers: Trades and Skilled Transport and Equipment Operators »