The 3rd annual Underground Comedy Railroad tour is coming to the Rio Theatre as a part of Black History Month. Introducing the voice of black Canadians, the tour is scheduled to stop is 10 cities across the country, arriving in Vancouver on February 22nd at 8:30pm.

The history of the Underground Railroad is not something to make light of. That network of safe houses and secret routes brought slaves to Canada, and freedom, in the 19th Underground Comedy Railroad tour will introduce the voice of black Canadians to fellow citizens and give centre stage to one of the country’s visible minorities.

The Underground Comedy Railroad tour showcases some of Canada’s accomplished comedians who offer a remarkable perspective that is uniquely Canadian. The line-up includes the following black Canadian stand-up comics: 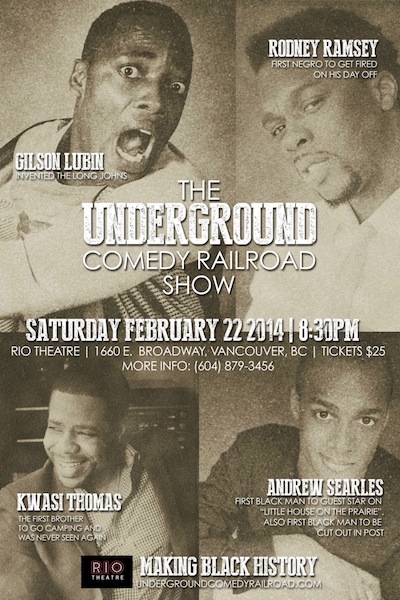 Tickets are currently available online for $25. I also have a pair to give away, here’s how you can enter to win:

RT to enter to win tickets to @UComedyRailRoad from @Miss604 http://ow.ly/twiWN

Update The winner is Kevin!