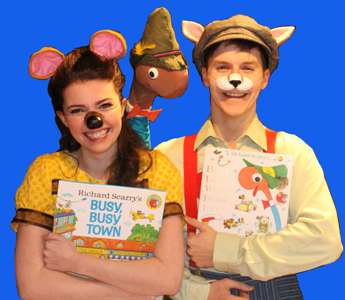 Richard Scarry’s beloved world comes to life in this charming musical! The little ones will love the bright colors, the dance-in-your-seat melodies and the fun costumes!

Join Huckle Cat, Lowly Worm, Betsy Bear and the rest of the gang as we discover and explore what people do all day! Huckle shows us how Farmer Pig and Grocer Cat work together to bring food to the town. Construction Worker and his crew build new houses, and Firechief and the gang keep them safe. Isn’t it wonderful how everyone works together to keep Busytown busy?

Tickets are available online now for this production (ages 3 and up) and there are special all ages performances on March 2nd, 9th, 16th, and 23rd at 10:00am for all ages (babes in arms). There will also be a VocalEye performance on March 9th at 2:00pm with vivid vocal description for blind and low vision audiences.

I have a family 4-pack of tickets to give away for the opening performance of Busytown (March 1st at 2:00pm) thanks to Carousel Theatre. Here’s how you can enter to win:

RT to enter to win a 4-pack of tickets for Busytown at @CarouselTheatre from @Miss604 http://ow.ly/tgU8C

I will draw one winner at random from all entries at 12:00pm on Friday, February 21, 2014. Follow Carousel Theatre on Twitter for more information and show details.

Update The winner is Kevin!