The most reproduced Canadian photograph from World War II will soon be immortalized in New Westminster. Wait For Me, Daddy was captured by Claude P. Dettloff on October 1, 1940 as troops headed off to war with the BC Regiment. Recently the CBC met up with Warren (Whitey) Bernard, the little boy in the photo broke free from his mother’s grasp and ran towards his father, Pte. Jack Bernard as he marched down 8th Street.

Wait For Me, Daddy 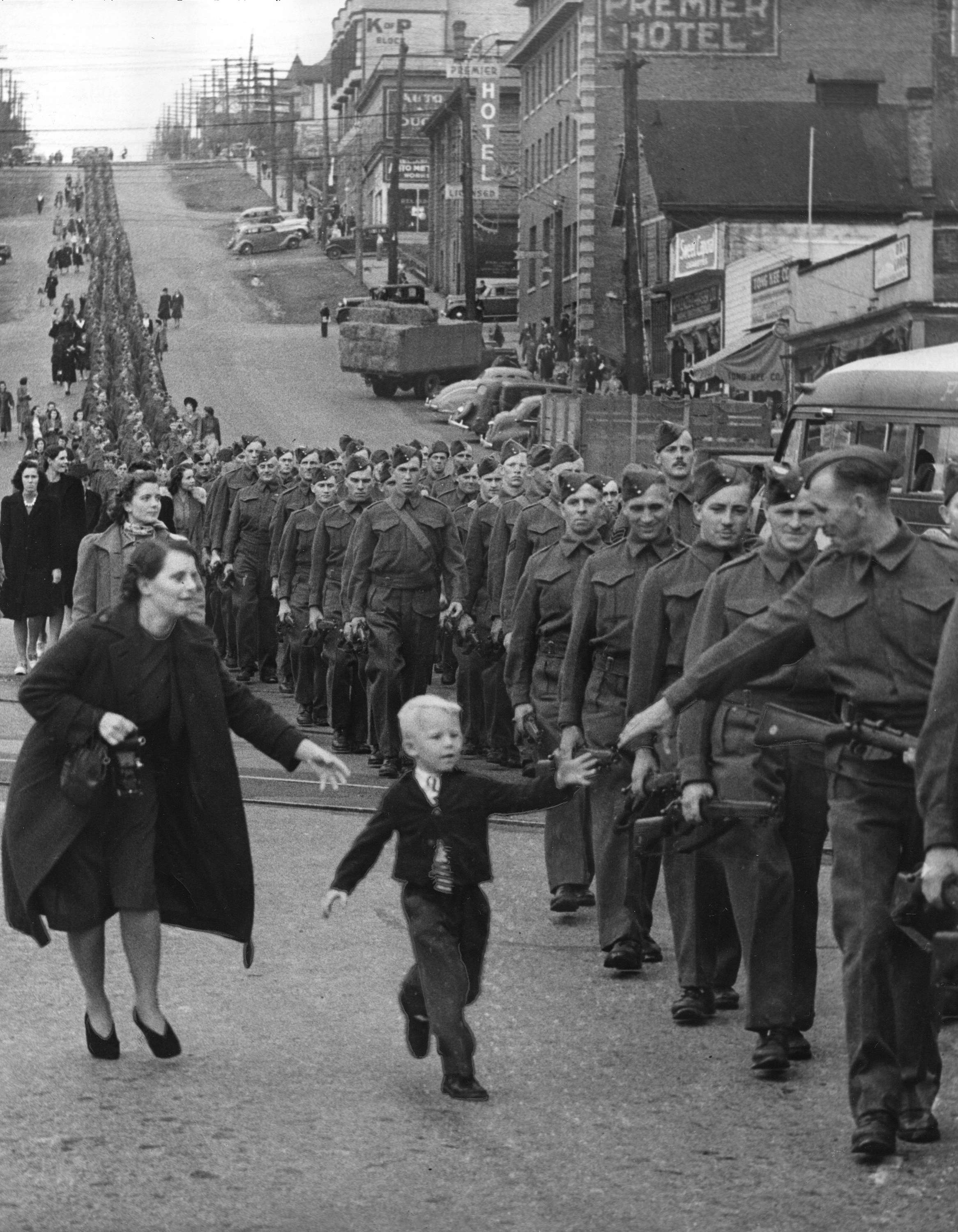 Bernard, now aged 79, lives in Tofino but returned to New Westminster for a dinner in his honour. Revisiting the scene, he says he can still recall the day he made a break for it — and his mother’s emotions. “She was pretty upset because I guess over here the soldiers were all milling around and everybody was saying goodbye — and then they were heading for the ship.”

The photo made the next day’s morning paper, but not long after it was featured across North America, including an October issue of Life magazine. It was eventually hung in every school in B.C. during the war. Although it will always be a touching statement on war and family, for the young boy, it became much more than that.

While his father’s regiment ended up being stationed in Nanaimo, BC, for more training before eventually heading off to fight in Europe, Bernard and his mother got by on a modest income in their rented Vancouver home. During the summers of 1943 and 1944, the young boy joined a touring group that travelled the province encouraging people to buy war bonds to support the soldiers fighting abroad. [Source: CBC Vancouver]

Bernard told the CBC that for him, the war ended when his dad came home safely, but he wants to ensure the memory of it is never forgotten by generations to come so he is donating memorabilia to the local museum.

Monument to be Installed in New Westminster

Two sculptors, the husband-and-wife team of Edwin and Veronica Dam de Nogales, have been commissioned to memorialize the famous photograph. A bronze monument, with three figures, representing the boy, his mother, and his father, will stand near 8th and Columbia in New Westminster. The city plans an unveiling later this year, followed by a re-enactment of the soldiers’ march in 2015 to mark the 70th anniversary of the end of the Second World War.

Share72
Tweet
Share
Pin3
Email
Reddit
WhatsApp
75 Shares
Current Contests on Miss604
*All contests are open to residents of Canada only, unless otherwise stated. Contest timelines are published on each individual post along with entry methods. Some contests may only be open to those 19 years of age and older. Winners are announced on the contest blog posts. Contest policy »