AMSSA is hosting the 10th Annual Vancouver Diversity Health Fair at the Croatian Cultural Centre on Saturday, March 1, 2014. This is one of the most dynamic multicultural events in the Lower Mainland and it celebrates a decade of promoting health and wellness to Vancouver’s diverse community. The theme of this milestone event is Promoting Family Health.

Affiliation of Multicultural Societies and Service Agencies of BC (“AMSSA”) is an affiliation of over 80 member agencies providing immigrant settlement and multicultural services in over 25 communities throughout BC. They provide leadership in advocacy and education for anti-racism, human rights and social justice, supporting its members in serving immigrants, refugees and culturally diverse communities. 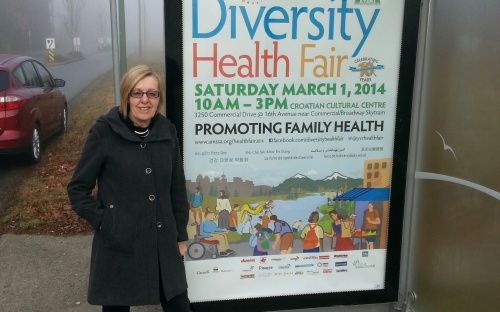 Over the past ten years the Diversity Health Fair has evolved into the largest event of its kind in Canada and I spoke to Lynn Moran, Executive Director of AMSSA to find out more about its success and how it has evolved over the years.

“One of the things that we were hearing through our multicultural health committee was that people that were counsellors to the immigrants — called settlement workers — were hearing from immigrants that they were having a really hard time accessing health services,” Moran says.

“There were a lot of barriers and those barriers could be everything from a language barrier (not understanding english) or the barrier could be just the Western style of medicine.”

Moran and AMSSA realized that there were two sides that needed to come together; immigrant families as well as health agencies and authorities who were also saying that they were having a hard time reaching out to the immigrant community to provide services that would support them. The first Diversity Health Fair in 2004 broke through these cultural barriers and they knew immediately that they had to host more events like this in the future.

Moran and her group developed a training manual for hosting health fairs and through their network of resources around the province there have been 49 Diversity Health Fairs in 8 communities over the last 10 years, reaching approximately 58,000 newcomers to BC.

Each year the Diversity Health Fair has a specific theme and AMSSA works closely with exhibitors to make sure they can provide the best resources, in the most practical way possible. They also offer a “Best Exhibitor Award” to encourage exhibitors to present translated materials, have interactive displays, and more.

“We look at trends and we see that for immigrants coming for a new country it’s very stressful, they’re looking for a place to live, finding a job, and so mental health is a key issue. If there’s not enough money coming into the household, the traditional breadwinner is no longer the traditional breadwinner, or it could be that in the family the kids speak english well but the parents don’t — the kids are taking on a role that traditionally they wouldn’t. All those things cause more stress so one of our health fairs we did on emotional well being because for many cultures they do not talk about mental health or mental health disease.”

This year’s focus is on family health, which Moran says it pretty wide open. Exhibitors will focus on safety, car safety, poison control, nutrition but also nutrition focused on children. The healthy family activity zone, which is at at the fair each year, will now host the Vancouver Farmers Markets kids program and ParticipACTION, gearing toward healthy living, getting kids involved in the kitchen, and being active. 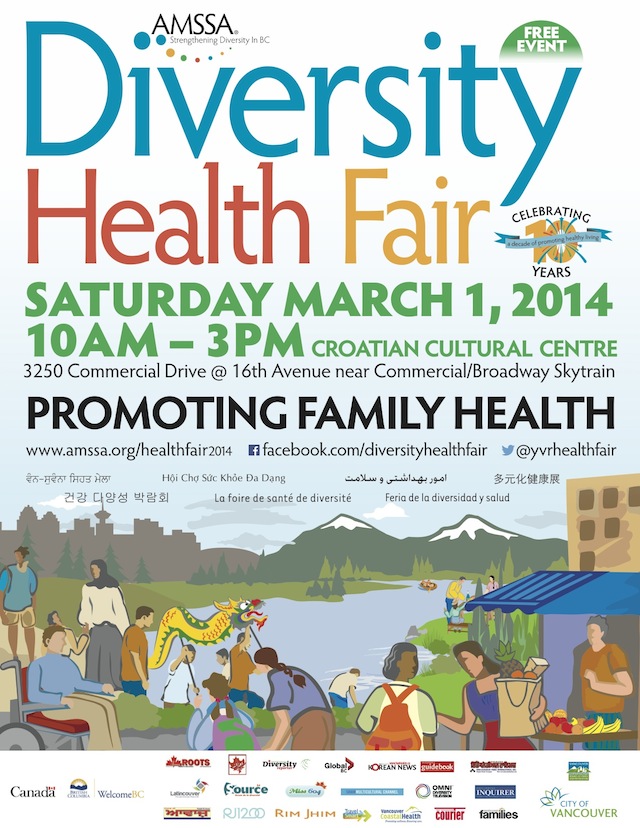 Miss604.com is a proud sponsor of this event