It’s encouraging to see more public art on display in Vancouver, especially since I began my tenure as a West End resident almost a decade ago. Sculptures dot the landscape, breaking up the (albeit gorgeous) blue of the sea and the green of the parks, capturing your eye and starring in many visitors’ photographs. The latest piece of public artwork will definitely be hard to miss as artist Janet Echelman installs a 745-foot aerial sculpture on Vancouver’s waterfront. 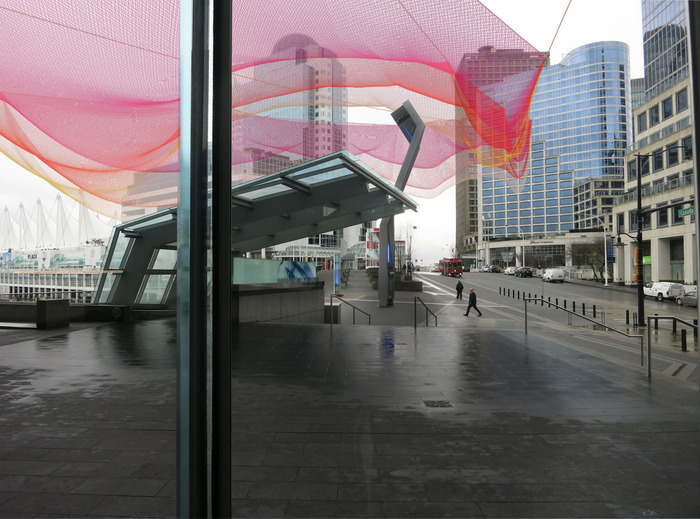 The massive sculpture will stretch from the rooftops of the Fairmont Waterfront Hotel and the Vancouver Convention Centre from March 17, coinciding with the start of the 30th annual TED conference in Vancouver. “It’s more than triple the length of any sculpture I’ve created,” Echelman said, noting the project is an engineering feat in addition to its massive creative expression. Echelman, one of this year’s TED speakers, took three years to create the work, choosing its site on the harbour because it had the desired energy she wanted.

But the project has not been without its challenges: Before the sculpture could go ahead, Echelman needed permission from federal aviation, Port Metro Vancouver and the city and provincial government. Echelman’s work is sponsored by design software company Autodesk, which has developed custom engineering software to model and test the design feasibility, structural integrity and wind loads on the sculpture.

The sculpture will include interactive lighting, resulting in a “crowd-controlled visual experiment on a massive, floating canvas,” according to her website. Echelman is also collaborating with Google and the Burrard Arts Foundation, a non-profit that has a mission to bring public art projects to Vancouver, which is helping to raise funds for the installation costs. [Source: Vancouver Sun]

Collaborating artist Aaron Koblin is also designing an incredible interactive component that will enable the public to choreograph the lighting through physical gesture via their mobile phones.

Another piece by Echelman, Water Sky Garden, was placed outside the Richmond Olympic Oval and her other works appear in cities around the world like San Francisco, Amsterdam, Sydney, and Phoenix.

You can support this 745-foot aerial sculpture by backing the project on Kickstarter.

This project is co-presented by Burrard Arts Foundation, a non-profit that that aims to bring awesome public art to the City of Vancouver.

Share9
Tweet
Share1
Pin1
Email
Reddit
WhatsApp
11 Shares
Current Contests on Miss604
*All contests are open to residents of Canada only, unless otherwise stated. Contest timelines are published on each individual post along with entry methods. Some contests may only be open to those 19 years of age and older. Winners are announced on the contest blog posts. Contest policy »