Canadian broadcaster and author Grant Lawrence has returned from his recent book tour that included: “5,812 kilometres. 30 events. 25 musicians. 12 libraries. 10 flights. 8 bars. 5 arts centres. 4 theatres. 3 bookstores. 2 rental cars. 1 lost CBC Sweater.” His new book, The Lonely End of the Rink: Confessions of a Reluctant Goalie was released by Douglas & McIntyre in the fall and currently sits on their bestseller list. 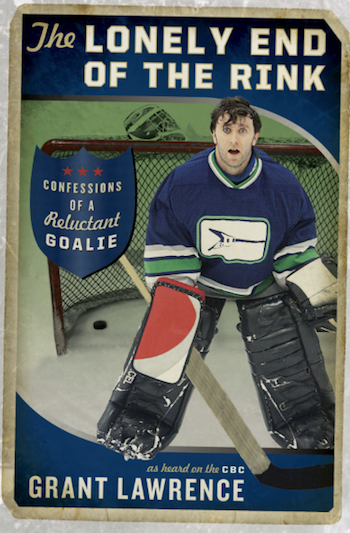 In this deeply personal, yet incredibly witty memoir about Grant’s relationship with hockey, the narrative passes back and forth between tales of Grant’s life and a fascinating history of hockey, complete with lively anecdotes about the many colourful characters of the NHL.

This is a side-splitting account of how hockey has played into various periods of his life, first as a knee-brace-wearing bully-magnet, then a rock star, and finally, a CBC broadcaster. Complete with Lawrence’s signature storytelling ability, this witty and personal book is a quintessentially Canadian story about our cultural lives, told through the grill of a goalie mask.

Not only does it contain colourful anecdotes about the history of the NHL, it is also chock full of stories about many Canadian celebrities—including comedians, musicians and actors—whose lives have been affected by the game.

The book delves deeply into hockey history, 1970s to 2000s, through the eyes of an on-again off-again Vancouver Canucks fan and as Andy Holloway writes for the National Post: “Despite its title and cover photo [Lawrence’s book] is actually less about being a goalie for the Vancouver Flying Vees, the team he cofounded along with other musicians, and more about finding where one fits in life.”

Every day this week I will give away a cool BC book. Here’s how to enter to win today’s featured title The Lonely End of the Rink: Confessions of a Reluctant Goalie by Grant Lawrence:

I will draw one winner at random from all entries on Monday, January 13, 2013 at 12:00pm. Follow Grant Lawrence’s everyday adventures on Twitter.

Update The winner is Anne Derkat!