Support a local bird in need this holiday

Here at the Stanley Park Ecology Society (SPES) we consider ourselves very lucky. Why? Because one of North America’s largest urban great blue heron colonies has chosen to make its home right here in Stanley Park. 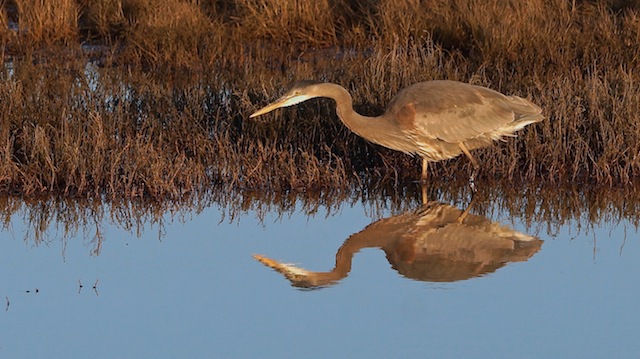 The Pacific great blue herons, currently a subspecies at risk in BC, first took up nesting residence near the Beach Avenue tennis courts in 2001 and have been coming back every spring since.

It’s unusual for a colony to nest in such a densely populated area. Human disturbance would normally cause the birds to abandon their nesting areas but the Stanley Park herons have learned to adapt, and in fact, moved in on this already busy area.

In 2013, SPES counted 122 nests; 81 of those were active and produced healthy fledglings. Although the number of overall nests was lower than in previous years, the percentage of nests that successfully produced fledged chicks was the highest since 2007. (Click here for the full 2013 Great Blue Heron Report)

What also makes the location of the heronry so remarkable is how easily park visitors can observe these amazing birds at close quarters. 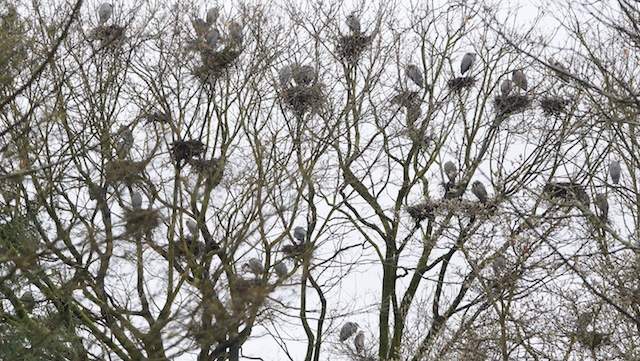 What to look for when visiting Stanley Park

Mid-February – Mid-March
The herons start to return from winter foraging grounds often around Valentine’s Day. That seems appropriate as both males and females are looking to start a family. Males and females dance together in the tree tops with their wings and necks outstretched. After a pair has formed a bond, the male searches for sticks in nearby trees and brings them to the female who decides if the stick is good enough to use in her nest. If the stick is not quite right she tosses it out of the tree but if she accepts it, she carefully weaves it into a nest high up in the branch of a tree.

March – April
Once the nest is complete, the female lays an average of 3-4 pale blue eggs in it. For the next 30 days, mom and dad take turns incubating (sitting on) the eggs to keep them warm. The newborn chicks look almost comical. Fluffy and grey, they have grey mohawks on their heads and they sway their necks as if they have no control over them. At this age they still need a parent to sit on them to keep them warm and protect them from predators including owls, eagles and raccoons.

May – June
Feeding time for older chicks is a flurry of activity as fights between the chicks break out and loud squawking fills the air. The adult herons search for fish and other small animal such as frogs and voles, which they bring back for their young. By seven weeks the chicks are almost as large as their parents, they start to flap their wings and walk along the branches by the nest.

July – August
By the end of August the heronry becomes quiet again. The last few chicks have left for their feeding grounds. SPES’ hope is that they will return to start their own family in two years.

How can you help Vancouver’s great blue herons?

Adopt a heron nest today! It’s a great holiday gift for anyone interested in helping wildlife in BC. This vulnerable subspecies doesn’t migrate, making the herons particularly vulnerable to habitat loss. They need protection, understanding, and community support if they are to survive the increasing pressures of urban development. Filmmaker Mike McKinlay made a great short film about the Stanley Park herons which was narrated by Robyn Worcester, SPES’ Conservation Programs Manager.

The Great Blue Heron of Stanley Park from Mike McKinlay on Vimeo.

For more info visit the Stanley Park Ecology Society website or call (604) 718-6523 to inquire about membership.