The 2014 Tim Hortons NHL Heritage Classic will take place Sunday, March 2, 2014 at BC Place as the Vancouver Canucks take on the Ottawa Senators in an open-roof stadium match. The teams’ official jerseys were unveiled last week and today, the NHL hosted a media kick-off event at BC Place with special guests. Vancouver’s Mayor Gregor Robertson took the opportunity to reference the Vancouver Millionaires defeating the Senators to win the Stanley Cup at Denman Arena in Vancouver in 1915. The Heritage Classic in March will be just shy of the 99th anniversary of that event. Following a sit-down chat with all parties involved, the Vancouver Canucks players in attendance headed to centre field to see if they could launch a puck through the uprights at BC Place. The record was held by Sidney Crosby, however today it was shattered by Kevin Bieksa. The NHL also took this opportunity to promote the NHL Revealed series that will go behind the scenes this season to five outdoor games (featuring nine different NHL teams) and the NHL’s participation in the 2014 Winter Olympics in Sochi. NHL Revealed: A Season Like No Other, in the spirit of HBO’s 24/7: Road to the Winter Classic, will debuts January 22, 2014 on NBCSN and January 23, 2014 on CBC (with a re-air January 26th on Sportsnet in Canada). Sportsnet will provide additional viewing opportunities on January 26th, February 2nd, February 23rd, March 2nd (two hours), March 9th and March 16th. 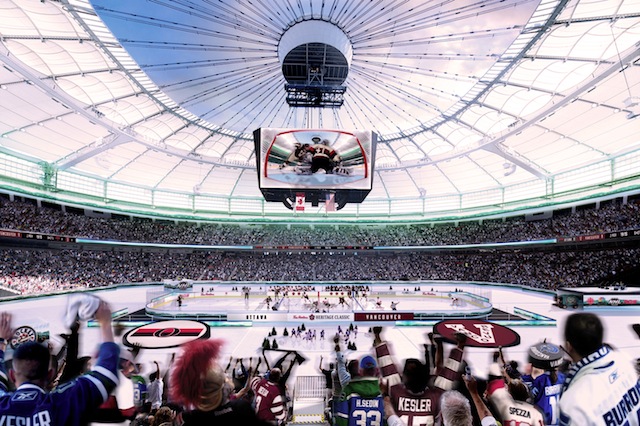 Rendering of the Heritage Classic in Vancouver at BC Place. Image courtesy of the NHL.

I have to admit that at first I wasn’t sold with the idea of and indoor/outdoor hockey game at BC Place but being there today with the sun beaming down and the frigid cross winds pinching my nose, I looked up at the stands and imagined them filled with over 50,000 hockey fans. My pond hockey-playing, toque-wearing, maple syrup-loving Canadian heart just melted and I found myself extremely excited for the upcoming match.

As a supporter of the 2014 Tim Hortons NHL Heritage Classic, the 37 downtown hotel members of the Vancouver Hotel Destination Association will be featuring great prices on their booking site at BeVancouver.com. Official fan packages for all NHL signature events will be available from Global Event Forum, the Official NHL Events™ Fan Package Partner.