Moist was a Discman staple of most good Canadian kids who grew up in Vancouver in the 1990s. Silver, Creature, and Mercedes 5 and Dime heavily rotated on CFOX while kids like me from Surrey would take the SkyTrain, then a bus, to all-ages shows at the Pacific Coliseum. We’d catch triple bills of our local favourites who also appeared each Friday night on TV in the Much Music Countdown.

“We never really broke up,” frontman David Usher told me over the phone today, “we announced it as a hiatus.” After 13 years Moist has regrouped and returned to the stage for a 6-city Canadian tour which lands in Vancouver on Wednesday, December 18, 2013 at the Commodore. 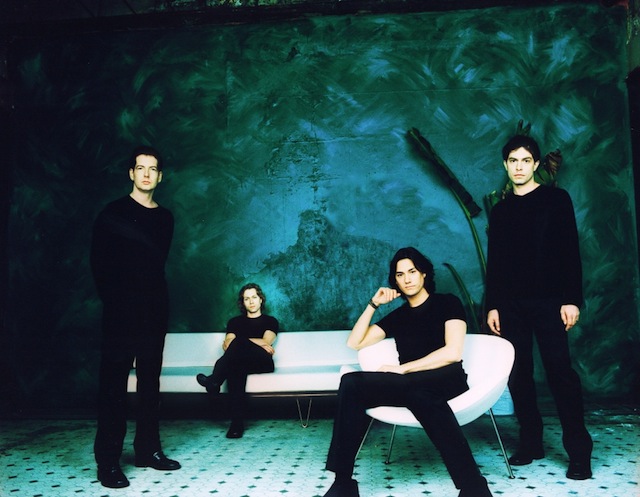 From 1993 to 2001, over the course of three multiplatinum albums, MOIST led the vanguard of the Canadian alt-rock scene, sold over a million records and toured relentlessly from sea to sea to sea, literally. After an exhausting decade, the band went on hiatus in 2001 to take a breath, pursue divergent personal and professional trajectories, build families and find their lives outside of MOIST. Now, twenty years after the start of it all and with renewed vigour and an irrepressible urge to rock, MOIST is back and “The Resurrection” is upon us. [Live Nation]

Usher said that they all decided that getting back together would be fun, on a whim, and before he knew it they were “in the sh*t, as they say.” “Every year it gets brought up and there’s always a reason not to do it. This year, I don’t know why, everyone was just really into it.”

“We have found something on stage that didn’t exist before. There’s still this energy… but there’s something new as well.”

They have already recorded a Christmas tune for CBC Radio 3, which make Usher chuckle being “half Jewish, half Buddhist” but it has shown that the group’s cohesiveness hasn’t skipped a beat.

One quick scan of YouTube to look up Moist’s video collection reminds one of just how prolific the band was during its time in the spotlight. Winning the Juno Awards for Best New Group of 1995, Best Video (Gasoline) in 1997, and various video and Canadian rock awards in the years to follow. “Doing this after so many years, I wasn’t really sure what to expect and how to feel about it.” It all seemed to come back together quickly for the group. “We’re pretty goddamn happy to be doing it again.”

David Usher alone has certainly kept busy, cranking out a new solo album every 2-3 years consistently since 1998 while living in New York and then returning to Quebec. He, along with Mark Makoway, Jeff Pearce, Kevin Young, and Francis Fillion (now on drums) have now already played a few shows in Ontario since resurrecting Moist and the reception has been extremely positive.

As for a new album on the horizon, Usher told me that they’re definitely writing songs and are “pretty committed to writing new material.”

During their hiatus, Moist was gone but not forgotten. David Usher was one of the first artists that I followed on Twitter after I joined the social network in March of 2007 — he joined in August of the same year. Referring to himself as an “uber geek” when I asked about social media and Twitter in particular, which didn’t exist when Moist was in its heyday, Usher said that he’s always been a first-adopter of tools. Like many of us who like the experiment with the ever-changing media landscape, he’s found the time to disconnect and also when to let the medium play its role.

You might be like me, attending your long-awaited first “19+” Moist concert at the Commodore, or you might just be getting acquainted with this Vancouver staple of the 1990s (through the previously-mentioned trove of YouTube gems). Tickets are still available online through Ticketmaster so be sure to scoop yours up. You can follow @DavidUsher and @MoistOnline on Twitter for the latest information tour updates.

Share16
Tweet
Share
Pin17
Email
Reddit
WhatsApp
33 Shares
Current Contests on Miss604
*All contests are open to residents of Canada only, unless otherwise stated. Contest timelines are published on each individual post along with entry methods. Some contests may only be open to those 19 years of age and older. Winners are announced on the contest blog posts. Contest policy »
Comments are closed on this post
Advertisement