It’s a sculpture as old as I am but thanks to the magical sharing power the internet and Flickr photos, it seems a new angle and new perspective of Gate to the Northwest Passage is captured almost every day. Installed at Vanier Park in Kitsilano back in 1980, this square, metal frame, with bottom ends twisted up like a paperclip was created by Alan Chung Hung and it’s today’s Vancouver Icons photo feature. 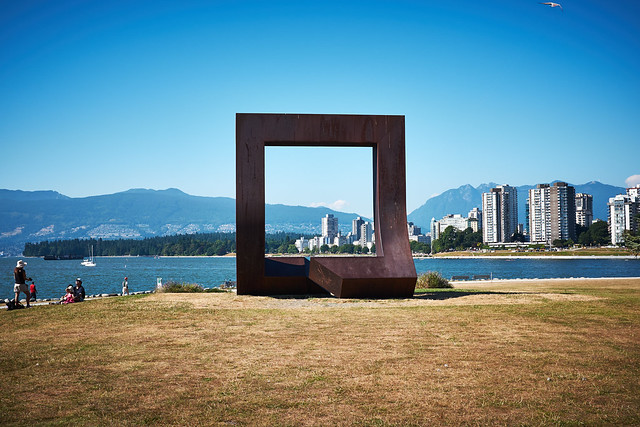 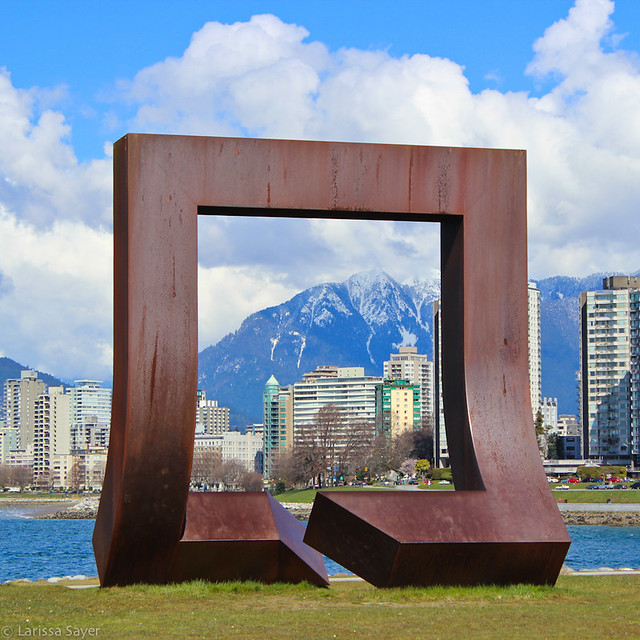 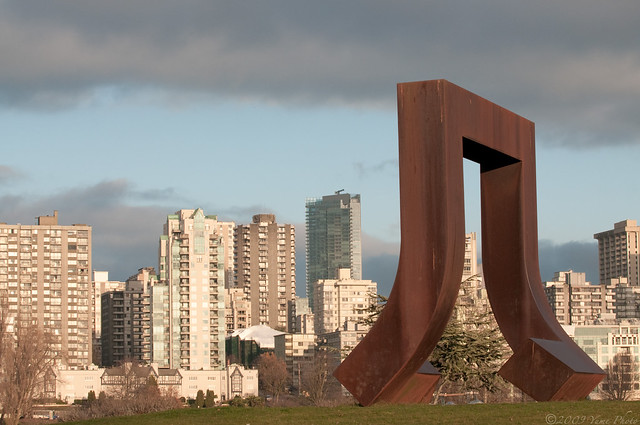 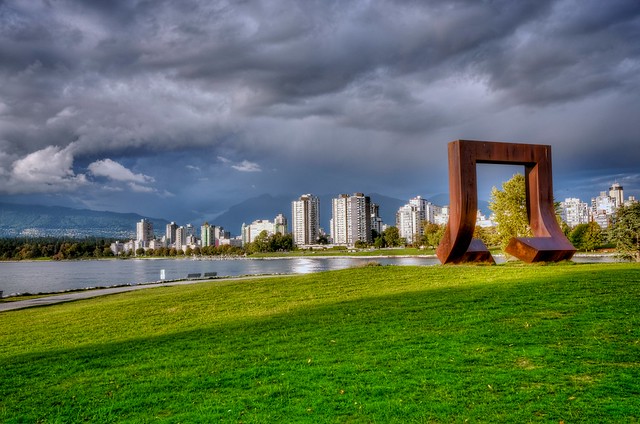 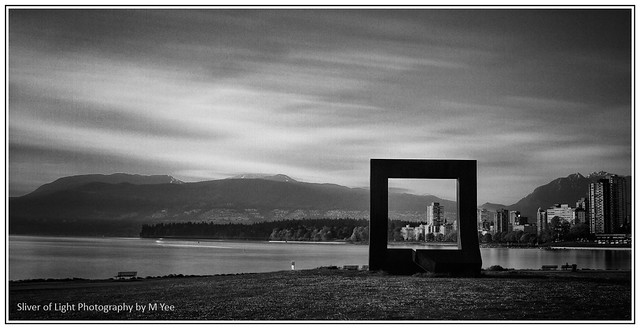 The large steel sculpture is set on a 26′ x 28′ plaza of paving stones. The sculpture consists of a 15′ square of corten steel. Each side of the square is 15′ long by 3′ high by 3′ wide. The bottom side appears to be cut apart in the middle and the two parts wrenched apart to form a gate or arch. The corten steel is designed so that the surface rust forms a protective coating.

Alan Chung Hung was born in Canton, China, in Feb 1946 and studied civil engineering at Chu Hai University in Hong Kong. He moved to Vancouver in 1969 and studied at the Vancouver School of Art. He was one of the founding members of the Chinese Canadian Visual Arts Society in Vancouver. Chung Hung died of cancer en route from Hong Kong to Vancouver in 1994. In the publication BC Sculptors, Chung said, “As I sit in the bush in the morning hours watching the buds grow, I become one of them – grow with them -from energy out of the earth. How strange our life is… we come from earth, return to earth but drawing life from death. I thrive on rule and order… appreciate definitions we make in our cultural history… …love fairy tales… fantasies… and illusions flashing across my mind! I am of the earth but growing in a fiery search of myself in contradictions and will be reborn from the ashes of desire.” [Public Art Registry]

The work was installed in 1980 to commemorate the arrival of Captain George Vancouver in Burrard Inlet, following a competition sponsored by Parks Canada one year prior. Guidelines for the competition required the use of permanent materials other than wood and that the work should “not be in the likeness of a man”. Hung’s Gate to the Northwest Passage won the juried competition and was originally set to be placed at Ferguson Point in Stanley Park. 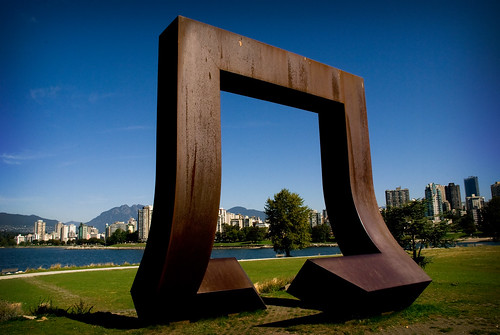 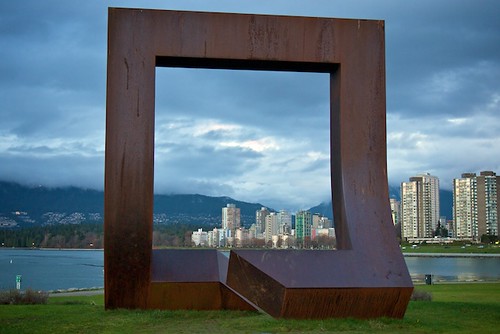 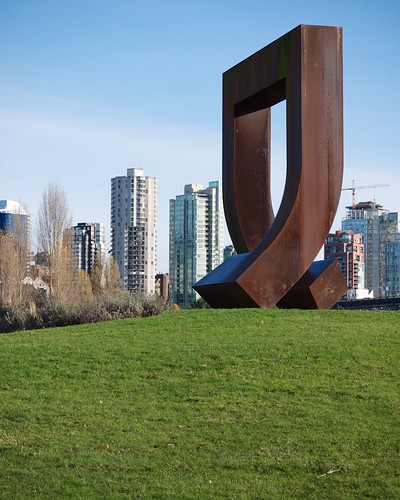 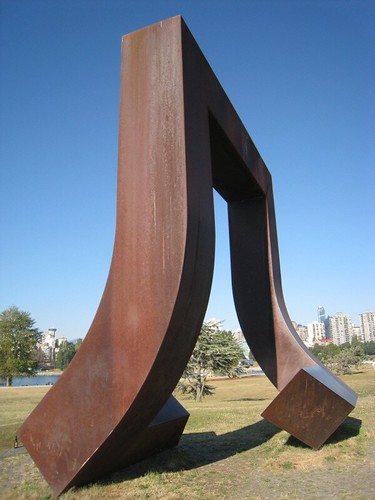 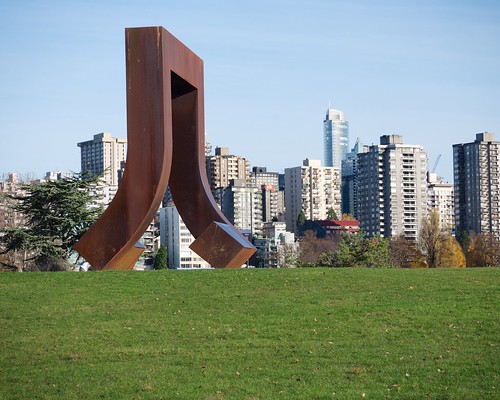 At first there was some vocal opposition to its placement, and I’m sure there are those who still dislike the sculpture to this day: Michael Duncan, Chief Curator of the Maritime Museum at the time, called it “a bloody monstrosity.” An article in the Globe and Mail teased that it could be “the world’s largest paper clip.” 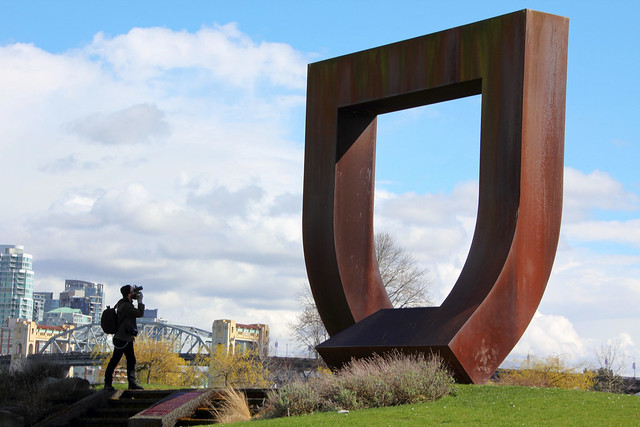 Over time, and through the photography of locals and visitors, I believe the piece has grown on many. For me, it’s not the sculpture in particular that leaves me filled with wonder, it’s the view through its centre that causes me pause and then take a step back to appreciate its frame. 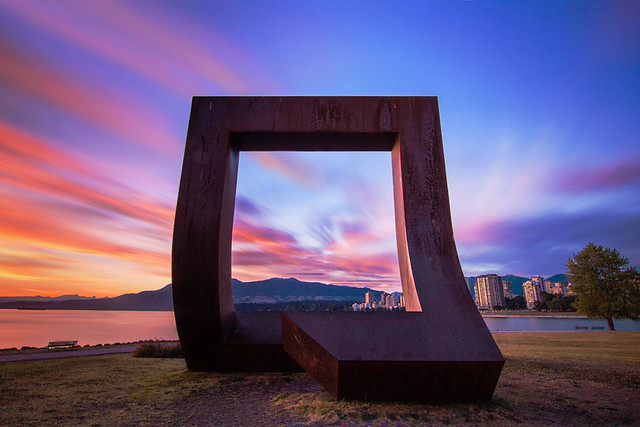 Other works by Hung that can be seen in downtown Vancouver today include Spring at Robson Square and Clouds hanging over 983 Howe Street.

Share63
Tweet3
Share
Pin10
Email
Reddit
WhatsApp
76 Shares
Current Contests on Miss604
*All contests are open to residents of Canada only, unless otherwise stated. Contest timelines are published on each individual post along with entry methods. Some contests may only be open to those 19 years of age and older. Winners are announced on the contest blog posts. Contest policy »
Comments are closed on this post
Advertisement