Canada’s “Brewery of the Year” in 2010 and 2012 just happens to be Central City Brewers + Distillers, located in the heart of my hometown of Surrey, BC. The highly-praised craft brewery is celebrating its 10th anniversary this week with the grand opening of their brand new 65,000 square foot facility. 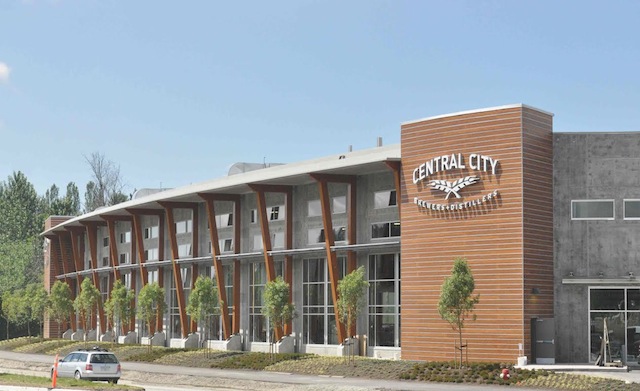 What: Central City Brewers and Distillers Grand Opening
Where: 11411 Bridgeview Drive in Surrey
When: Friday, November 29, 2013 from 3:00pm to 7:00pm
Tickets: This event is free and open to the public.
craft brewery is organizing a public grand opening event on Friday, November 29th

The brewery first opened in 2003 as a brewpub and liquor store in downtown Surrey. Their beer grew so popular that in 2005, the brewery launched a canning line, enabling them to sell its beers at its own liquor store, and beyond. By 2009, the brewery reached full capacity.

Widely known for its award-winning premium craft beers including their signature Red Racer brand, the new, multi-million dollar, 65,000 sq. ft. brewery and distillery will increase its brewing capacity from 7,500 hL to 25,000 hL per year immediately, and up to 100,000 hL+ within a few years. The new facility will also have distilling capabilities that will enable CCBD to add craft distilled gin, vodka, rye and single malt whiskeys to their product offering.

Rows of glistening stainless steel fermentation tanks and copper still kettles line the insides of the brewery floor. In addition, four quality-assurance labs, along with a cellar (for barrel-aged beer and new whisky products) and a massive cooler reside in-house. An open-concept foyer greets the visitor which opens to a tapping room where people can sample their award-winning beer, and a retail store where full-height fridges stocked full of Red Racer beers beckon the thirsty traveler.

For the grand opening celebration there will be shuttles running from Scott Road SkyTrain station every 15 minutes, prizes every hour, and 99.3 The Fox will be live on location. Call (604) 588-BEER for more details. A live band will entertain, tours will be offered, beer will be served and food trucks will be on site for all to enjoy.