The 13th annual West Coast Women’s Show is western Canada’s largest and most popular women’s consumer event — and the ultimate girls’ night out. Taking place at TRADEX in Abbotsford, the show will provide three days of shopping, entertainment, fashion, food, and more from Friday, October 25th until Sunday, October 27th.

One of the main features of the West Coast Women’s Show is its stellar entertainment line-up. This fall, Sherry Holmes, of HGTV’s Holmes Makes It Right® will be taking to the Do-It-Herself Home Improvement Stage twice per day on Saturday and Sunday during the show. I had the chance to reach out to Sherry to talk about her career in the skilled trades and on television. 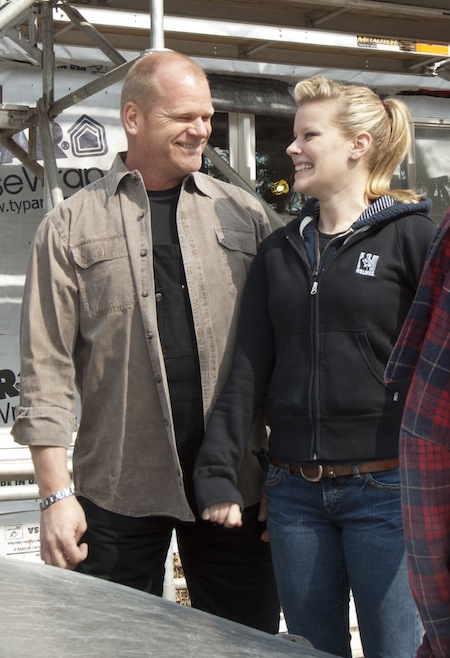 Rebecca: Did you always plan on going into the family business or is it something that just happened naturally?

Sherry Holmes: “No. I actually never had an interest in working with my father. I’ve always had a mind of my own and I get bored very easily. I couldn’t see myself sticking to one career for too long. But when the crew was preparing to head to New Orleans, my dad asked me to give construction a try and participate with the build. It was my first construction job. I loved everything about it! And now five and a half years later, I’m still with the crew.”

Rebecca: I saw you on the Holmes in New Orleans series and read that you love to travel. Is that part of a bigger picture for you – getting to help out at home and on the road?

Sherry Holmes: “I love to travel! I want to see the world! I’ve done a couple of volunteer projects here and there. But I would love to do more and help everywhere I can by incorporating two things that I love: Working with my hands and travelling. That’s the dream.”

Rebecca: Do you think your own show would be in the works someday? (I read on a Holmes fan page that it might be…)

Sherry Holmes: “You never really know. Right now, I’m just working away. I’ll see what happens in the future. I never had an interest in working in television — I sort of fell into it. It took me years to get comfortable having a camera in my face, but now, I’m open to whatever possibilities television might bring me.

Rebecca: Women account for only about 5% of persons receiving a ‘certificate of qualification as a trade qualifier’ in Canada (per Stats Can). Do you think it’s important to get more women involved in skilled trades and how do you see that happening?

Sherry Holmes: “Of course I’d like to see more women in the skilled trades! I believe there’s always been a bit of a stereotype towards tradespeople, especially women. It’s really so empowering to be able to work alongside men and accomplish the same things. Being a specific gender isn’t required for any job anymore. I’m starting to meet more and more women who are involved in the skilled trades. It’s wonderful to see people really getting out there and doing whatever it is that will make them happy in a career.”

Rebecca: Your bio on the West Coast Women’s Show page says you’re a tiling superstar, what’s one tiling tip you can share that anyone can do or help with?

Sherry Holmes: “A superstar, eh? Well, that’s quite flattering! Tiling was one of the first jobs I excelled in. As I learned I got myself into some interesting scenarios. My biggest tip would be to clean as you go! There’s nothing worse than trying to clean up dried concrete film off beautiful, expensive tile. Also, always make sure you back-butter your tiles. You want to make sure you get good adhesion between the floor and the tile. You don’t want your tiles cracking and popping up later!”

Miss604 is a proud media partner of the 13th annual West Coast Women’s Show
Share16
Tweet
Share3
Pin
Email
Reddit
WhatsApp
19 Shares
Current Contests on Miss604
*All contests are open to residents of Canada only, unless otherwise stated. Contest timelines are published on each individual post along with entry methods. Some contests may only be open to those 19 years of age and older. Winners are announced on the contest blog posts. Contest policy »
Comments are closed on this post
Advertisement