This week Upintheair Theatre presents Inside the Seed, a re-imagining of the ultimate Greek tragedy, Oedipus Rex. The play, written by Jason Rothery and directed by Richard Wolfe, is set in a giant bio-genetics corporation that aspires to grow the perfect seed — The Golden Seed — to feed the world and end starvation. 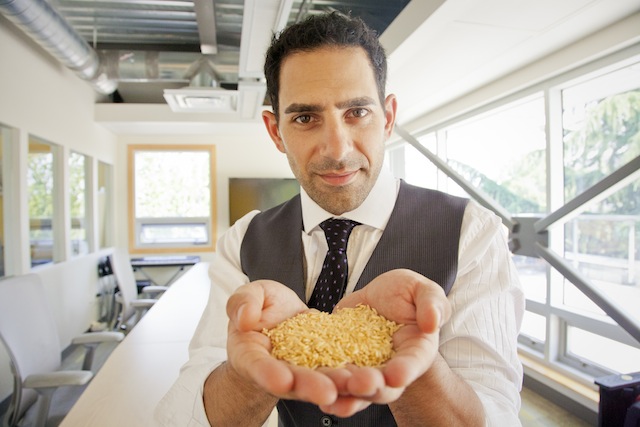 The play, which has been three years in the making, was suppose to premiere last year at a different, but when The Cultch learned about it, they urged Upintheair to wait a year so that it could be part of their 2013 season.

Inside the Seed tackles big ideas and issues relevant to what’s going on today in the world of modern agriculture –especially with a Monsanto Executive recently winning the Nobel Prize of Agriculture and there reports of a genetically modified “Golden Rice” to be approved for human consumption by the World Food Organization. Though these issues are very real and serious, Upintheair’s objective is to present these issues to the audience in a digestible way.

“It is a thriller–fast-paced, entertaining, lots of laughs,” said Daniel Martin, producer of Upintheair Theatre. “If you want to tackle serious issues, tackle them by entertaining the audience.”

The play includes a full, multi-cultural cast, including: Mia K Ingimundson, Carl Kennedy, Tamara McCarthy, Adele Noronha, Alison Raine, Patrick Sabongui, Dallas Sauer and Tetsuro Shigematsu. Inside the Seed runs until Saturday, October 12, 2013 at the The Cultch (1895 Venables Street, Vancouver). Follow Upintheair on Twitter and Facebook to learn more about this production and others.