Sir Arthur Conan Doyle’s classic Sherlock Holmes adventure, The Hound of the Baskervilles, is coming to the Newton Cultural Centre in Surrey for performances this Halloween season. Adapted by Steven Canny and John Nicholson, this spoof is a three-man version of the legendary mystery directed by Ellie King for Bad Dog Productions. 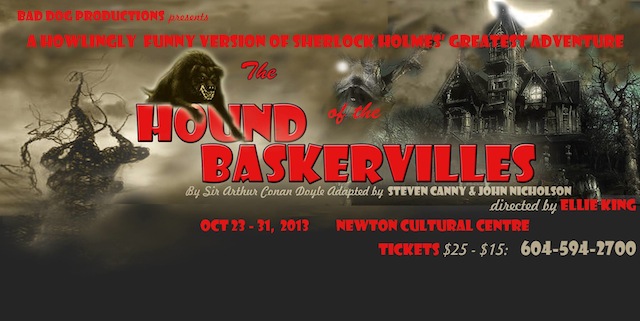 The Hound of the Baskervilles is one of the most famous and admired detective stories ever written. Published in 1901 and 1902, it originally appeared in nine monthly installments in The Strand magazine. Like Dickens’s serialized novels of the same era, each installment ended with a suspenseful “cliff-hanger” that kept author Arthur Conan Doyle’s audience clamouring for more.

In the story, the old and noble Baskerville family is threatened by a curse: “A great, black beast, shaped like a hound, yet larger than any hound that ever mortal eye has rested upon” terrorizes and kills any family member who comes to live at the Baskerville estate. As the story opens, the Hound seems to have claimed its latest victim, Sir Charles Baskerville.

Originally created by Steven Canny & John Nicholson for Peepolykus, an innovative theatre company in Yorkshire, England, this imaginative and hysterically funny retelling of the classic Sherlock Holmes story has enjoyed a hugely successful tour of the UK and Bad Dog is proud to be presenting the Western Canadian Premiere of this wonderful piece of theatre.

Full of fun, this is also a fine piece of theatre and is recommended for all ages. If you would like to check out The Hound of the Baskervilles, I have a pair of tickets to give away to opening night on Wednesday, October 23, 2013. Here’s how you can enter to win:

I will draw one winner at random from all entries at 12:00pm on Thursday, October 17, 2013. Follow the production on Facebook for more information.

Update The winner is Lesley – Stotes!