If Ballet BC’s season opener, Tilt, is any indication, there is yet even more life being breathed into the company. Last season completely blew me away — not only did the phoenix rise from the ashes (of near bankruptcy), it soared around the the world, taking the audience with it on a glorious ride. 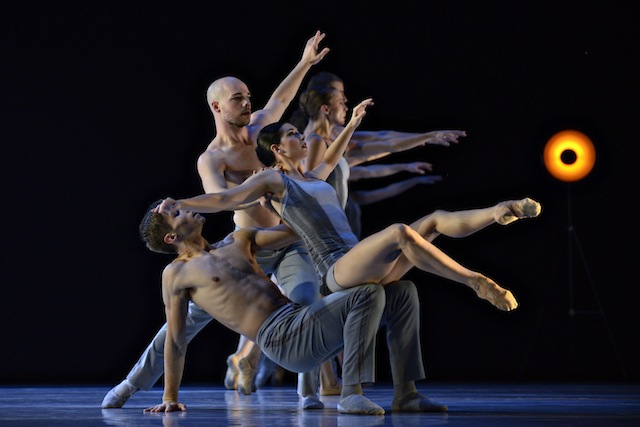 I and I Am You. Choreography Jorma Elo. Dancers / Alexander Burton, Racheal Prince, Daniel Marshalsay & Artists of the Company.

The first thing that struck me as being different with Tilt, as opposed to previous performances in years past, was the audience. It was younger and for the first time ever, I ran into people I actually knew at the ballet — not just one person, but four to five. I also noticed there were more men than usual, which leads into my next observation about Tilt: the men.

In the first piece, I and I am You, choreographed by Jorma Elo, I noticed how the male dancers just bursted life into the piece — bare-chested and exploding all the floor, dancing together, lifting each other up, letting each other fall into each other, which was refreshing to watch because ballet always seems to be focused on female dancers and her movements.

I’m a huge fan any choreography by the company’s Artistic Director, Emily Molnar, and loved her piece 16 + a room. It was just as inventive as her pieces from previous seasons, and to me is always seems the most avant-garde component of the program, with movement, structure, and even lighting.

Johan Inger’s Walking Mad, which debuted at Ballet BC in the spring 2012, was a riot and a visual treat. Set to Maurice Ravel’s looping Boléro, it’s a clever piece of boys chasing girls around a moveable wooden-fence with doors which the dancers run through, climb on, and dance on. My male friend, who had never been to the ballet, said that this piece was his favourite, and as we stepped out into the night air, he also said (along with many others, I’m sure) that he would be very open to going to the the ballet again.