On this day in history (September 2nd, 1927) Jonathan Rogers sold his namesake “Rogers Building” at the corner of Pender and Granville for $1 million to General F. A. ‘One Arm’ Sutton. At the time, it was the biggest real estate transaction in the city’s history. [source] Rogers was among Vancouver’s earliest pioneers and in 1949, Peter Carter-Page wrote in The Province that Rogers’ story is largely Vancouver’s: Rogers, Carter-Page told us, was born in Plas Onn, Denbighshire, Wales, and until he was 15 spoke not one word of English. He arrived in Vancouver, a fresh-faced youth of 22, in May of 1887—aboard that famed first CPR train from Montreal. Rogers was the first passenger to step off the train, and he recalled that the Vancouver City Band struck up the tune See the Conquering Hero Comes. Rogers later confessed, with some embarrassment, that he thought the band was playing it for him, as the first person to emerge from the train.

The city was a simpler place then: Rogers could recall when horse races were run down Granville Street. He liked the place so much he stayed for the rest of his life, nearly 60 years more. Twenty-six of those years were spent on the city’s park board, nine of them as chairman. He also served twice as an alderman, and twice as president of the board of trade (1914 and 1915).

But he began simply, as a painter, helping to paint the first Hotel Vancouver. He later became a builder and contractor, and it’s said that more than 300 metres (1,000 feet) of Granville Street footage was built by him. The building for which he will be best remembered—and not just because it’s named for him—is the Rogers Building. [source]

The 10-storey Rogers Building was designed by a Seattle firm, Gould and Champney and was initially announced as “The Glyn Building”:

The October 20, 1911 issue of BC Saturday Sunset gave some of the details of “what promises to be one the finest office buildings on the Pacific Coast…” The building, said Sunset, “is designed along the lines of the modern French Renaissance (with an) exterior of polished Glasgow granite, in combination with cream-colored terra cotta facing… All the interior finish woodwork is to be of hardwood with white Italian marble corridors and stairs throughout… The building will be a monument to Alderman Rogers, whose faith in the future of this city is exemplified in the erection of a building which, when completed, will represent an expenditure of nearly $600,000.” [source] This state-of-the-art reinforced concrete structure was the biggest the city had seen. Building Vancouver writes:

The fifteen carloads of enamelled terra cotta came from Chicago. The ornamental iron was purchased in Minneapolis and St. Paul and five of the most up-to-date elevators were bought in Toronto. Nearly 60,000 feet of cork flooring and 60,000 feet of linoleum came from England and 8,000 barrels of California cement were used.

From the book Building the West:

Vancouver’s prosperity during the Edwardian era was indicated by a large number of impressive terra cotta commercial structures. Jonathan Rogers, one of the city’s most successful land developers, chose prominent Seattle architects Gould & Champney to design a prestigious skyscraper. Gould & Champney maintained a branch office in Vancouver from 1910-12, and Augustus W. Gould for several years afterwards. The completed Rogers Building, with its glacial white cladding, demonstrates the deft way that classically-trained architects of the time could manipulate traditional elements in a thoroughly contemporary manner. Rogers passed away in 1945 and his wife Elizabeth took over the building until the Koerner Foundation purchased it in 1955. The present owner, Equitable Real Estate Investment Corp., bought the building from the foundation in 1976. 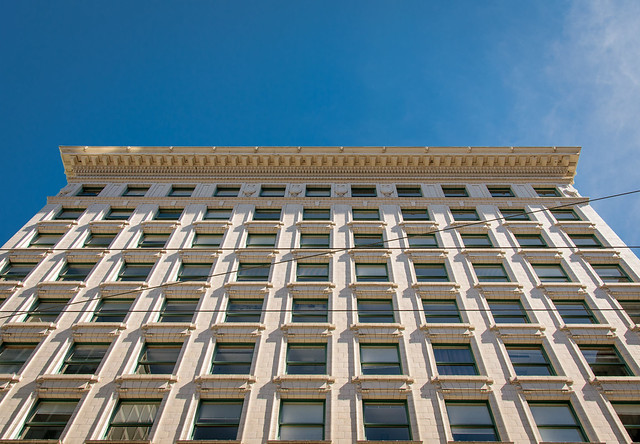 Share24
Tweet13
Share
Pin109
Email
Reddit
WhatsApp
146 Shares
Current Contests on Miss604
*All contests are open to residents of Canada only, unless otherwise stated. Contest timelines are published on each individual post along with entry methods. Some contests may only be open to those 19 years of age and older. Winners are announced on the contest blog posts. Contest policy »