This morning the very last white panel from the exterior of Pacific Centre was removed. The infamous white facade that wrapped around the building’s Howe, Robson, and Granville walls made it one of the most disliked structures in downtown Vancouver for decades. Once occupied by Eaton’s and then Sears, the exterior and interior renovations are a part of a multi-year re-development plan for the shopping centre. 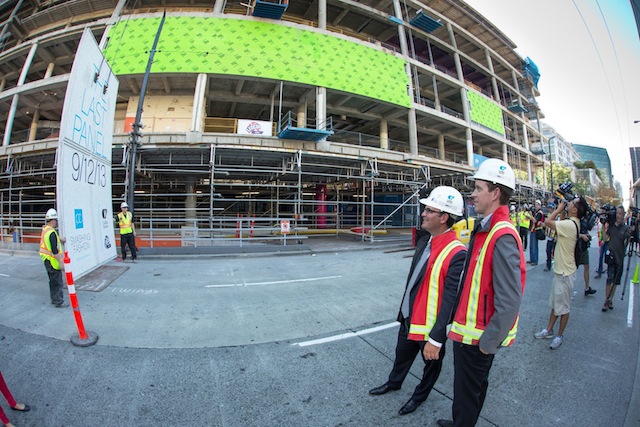 The last stone panel on the side of downtown Vancouver’s Sears building was removed today, bringing to an end the building’s reign as “Vancouver’s unending urinal wall.” [Global News: What Do You Think Is The Ugliest Building In Vancouver?]

With the white walls down, the Ledcor Group is moving to the next phase of the project, rebuilding and refitting the structure. The new exterior will feature a combination of glass, stone, and a curtain wall system. What will happen to all of those old wall panels? All 473 of them will be repurposed out at the Langley Regional Airport to create 6,000 square meters of new roadway.

To date 91% of the waste materials have been diverted from landfills to recycling or remanufacturing companies as a part of the project’s LEED Gold Certification process.

4 floors of new office space are expected to open in early 2015 with new retail spaces opening in mid 2015, and Nordstrom’s Canadian flagship store (taking up 4 floors) will open its doors toward the end of that year. You can read up on the whole project and check out renderings on the 725 Granville website.

Also on Miss604.com
« Megaphone Magazine Find Vendor App
Things to do in Vancouver This Weekend »