Movie houses in Vancouver have had a rough time in recent years with legal battles and closures for some. One Vancouver film institution, The Cinematheque, is doing what it can now by enlisting the public to assist in funding for their digital conversion – ensuring that a legacy of film preservation and entertainment lives on sustainably with the help of modern technology. 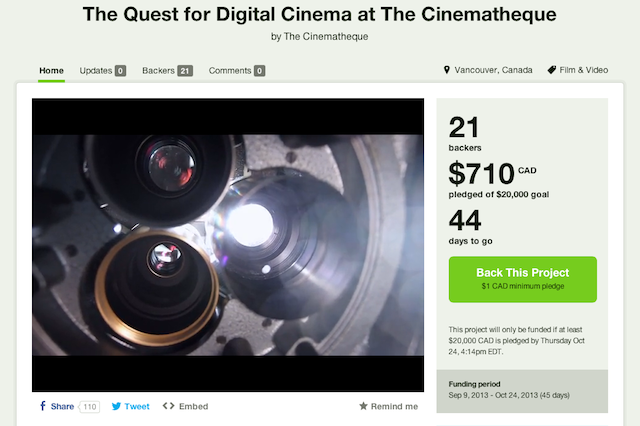 “For more than a century, since the birth of cinema, when you went to the movies, when your parents or grandparents or great grandparents went to the movies, you’ve seen the projection of 35mm film – thousands and thousands of feet of celluloid rolled onto several reels and run through a mechanical projector. That’s how a movie was presented. And now, suddenly, that has changed.”

For more than 40 years, The Cinematheque has brought Essential Cinema to Vancouver audiences via traditional 35mm celluloid. Due to recent, revolutionary technological shifts in the film industry, they must make the change to DCP.

What is DCP?
DCP stands for “Digital Cinema Package”. If you’ve seen a movie at another theatre in the last year, it was likely shown in this format. Before DCP, a few thousand feet of 35mm film would be wound in platters or reels, and then fed through mechanical projectors. Now, movies play from hard drives through media servers, allowing for impressive next-generation video and sound, while also being more economical and environmentally sensitive.

Currently, The Cinematheque screens in 35mm primarily, but the ability to present DCP is critical to our sustainability. Increasingly, new releases, foreign films, indie productions, and many restorations and re-releases of classics and masterworks are being made exclusively in DCP. To continue providing Vancouver audiences with unique, curated programming, [The Cinematheque] must adapt quickly and meet the future head on.

The Cinematheque Kickstarter
With the launch of Kickstarter in Canada, The Cinematheque has put together funding packages to make your decision to support the project as easy as possible. Ultimately the DCP will cost more than $60,000 (plus taxes and shipping) and even with a financial plan in place for the upgrade, The Cinematheque (a non-profit arts organization) still needs to raise $20,000.

To thank project backers, The Cinematheque has created some special thank you gifts including movie passes, limited edition posters, a private night at the movies, and more. Simply visit the Kickstarter page to learn more and back their DCP project.