Molson Canadian Live and The Cellar Nightclub on Granville have announced their Summer Concert Series line-up and it’s packed with local talent. After a day in the sun, duck inside to enjoy live music from the following acts: 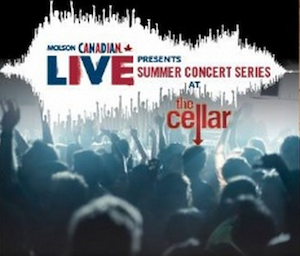 When you attend a Molson Canadian Live Summer Concert Series event at The Cellar between now and September 1st, 2013 you will be entered to win a grand prize of a trip for two to Ontario’s Cottage Country for the Molson Live @ The Lake concert event in September.

Attendees at The Cellar specifically between now and August 7th also have the chance to win tickets to Squamish Valley Music Festival, which is coming up August 9th and 10th.

Tickets for the Summer Concert Series at The Cellar are available online in advance for $10. Doors open at 7:00pm on showcase nights.

If you would like to win your way into the Summer Concert Series on Friday, August 16th, 2013 with Fields of Green, Modern Limits, This Side of Town, and Quarterlights, I have a pair of tickets to give away. Here’s how you can enter to win:

RT to enter to win tickets to a @cellarnightclub Summer Concert Series night from @Miss604 http://ow.ly/nt4cS

I will draw one winner at random from all entries at 12:00pm on Wednesday, August 7th, 2013. Must be 19+. Please enjoy responsibly. Follow The Cellar on Facebook and Twitter for more special event info.

Update The winner is Tracy!