Emerging Canadian short filmmakers will have the chance to showcase their work on Air Canada flights around the world from August 1st to December 31st as a part of the enRoute Film Festival. 16 selected shorts will be announced at a public screening in Vancouver at the end of July. 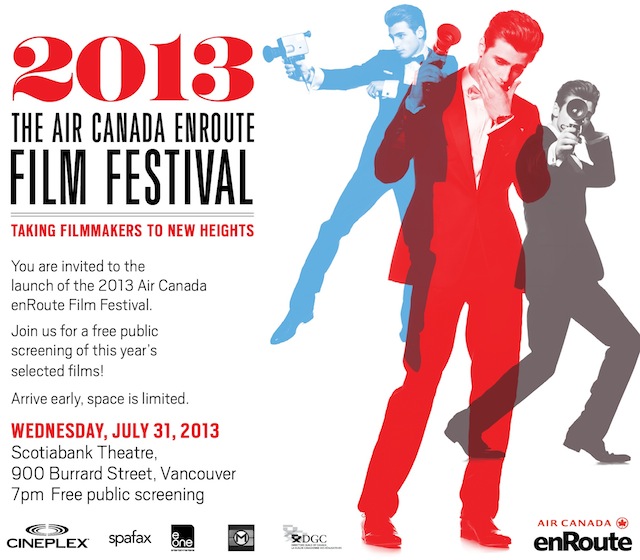 What: enRoute Film Festival public screening
Where: Scotiabank Theatre in downtown Vancouver (Burrard at Smithe)
When: Wednesday, July 31, 2013 at 7:00pm
Tickets: The public screening is free but arrive early to secure your seats.

Winners, selected by a star-studded jury, will be announced after a screening event in Toronto in November. Each will receive an all-inclusive trip for two to the Sundance Film Festival in Salt Lake City, Utah, courtesy of Air Canada. The winner of Best Short Film will also receive $5,000 courtesy of presenting sponsor Cineplex.

Millions of Air Canada passengers will be able to view the selected short films on their personal seatback in-flight entertainment system this summer. Passengers and movie-lovers alike will have the chance to vote for their favourite film to win the People’s Choice Award throughout the month of August as well.