We’re a pair of 30-somethings in the city with no kids but that doesn’t mean that every time we go out that it’s a “date night”. Running to the grocery store or market, grabbing some take-out, and covering events (when John‘s got a camera in his face the whole time) aren’t the most romantic escapades. However, we do make time to focus on each other — how else could I put together a list of Truly Vancouver Date Ideas — and whether it’s a soccer match or a concert, we put make sure to put each other in the spotlight. Last week we had the opportunity to have a fantastic date night in downtown Vancouver, that really came together at the last minute.

This year marks the 100th anniversary of the St. Regis Hotel, located on the corner of Dunsmuir and Seymour. It’s one of those hotels that I have walked by, read about, and written about, but have never entered — until last week. We booked a night there last Thursday and after reading that it is ranked within the Top 10 hotels in Vancouver on TripAdvisor I knew we were in for a treat.

I arrived early so I waited in the business centre, using complimentary WIFI, while our room was getting made up. Once it was ready I headed up to the third floor of the beautifully restored boutique hotel. Dark woods, bright blue and green artwork, and textured wallpaper gave even the hallways a refreshed yet classic feeling. Arriving in the room I turned on the universale power switch by the door. I had read up on the energy-saving elements at the St. Regis and it’s a good thing too because when I went into the bathroom, which was already soaked by natural light through the window, the light switch didn’t work. It’s kind of an automatic way to save energy when no one’s around or when you don’t necessarily need to have lights on.

There was a convenient power strip near the desk in the bedroom so I could plug in my laptop (and soak up some of that energy I was saving by leaving the blinds open and turning off the lights), a television in the living room area and the bedroom, and the bathroom was huge with double sinks and optional in-floor heating. I walked down to the St. Regis Liquor Store in Granville SkyTrain station to meet John after work and pick up a bottle of Okanagan wine to enjoy in the room before we headed out for the night. We polished off some room service, which was reasonably priced for a hotel (about $35 for two large dinners), had some sips of the complimentary Fiji water in our suite, and we were on our way.

I go to the Vancouver Opera, Vancouver Symphony Orchestra, plays, musicals, and other performances all the time (for work, mostly) but it’s rare that I have John by my side in the audience. Luckily, he’s a fan of Les Misérables so I knew he would be game for this performance when it came to town. We walked out of the St. Regis on Dunsmuir, headed a few blocks east, and we were right at the Queen Elizabeth Theatre no more than 5 minutes later. 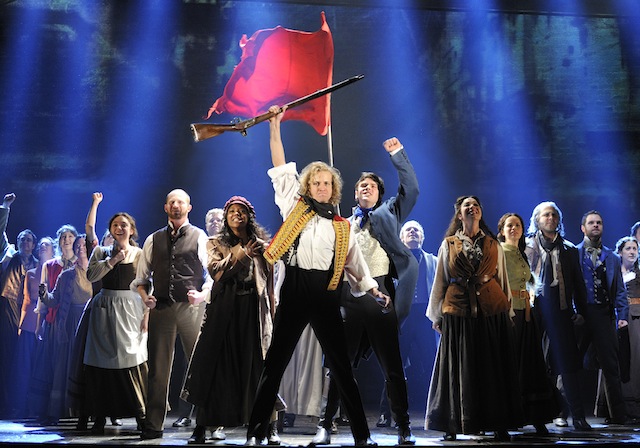 Broadway Across Canada’s Les Misérables (presented by Cameron Mackintosh) was a bit different from previous shows I have seen based on the legendary literary work of Victor Hugo. Artistic elements in this all-new 25th anniversary production of Boublil & Schönberg’s musical revealed imagery and scenery inspired by the paintings of Hugo himself. Deep, dark, and peppered with colour from the 19th century costumes that ranged from rags to uniforms and ball gowns.

Hooked from the start of the first act, chills ran from your spine to your finger tips during The ABC Café / Red and Black, Éponine’s On My Own and the powerful Do You Hear the People Sing?. Standouts for us were Gaten Matarazzo as Gavroche, Erin Cearlock as Little Cosette, and Briana Carlson-Goodman as Éponine.

Jean Valjean was played by Peter Lockyer who evoked even more emotion from the audience with his almost operatic performance. Crowd-favourites in any version of the show, Madame Thénardier and Thénardier played by Shawna Hamic and Timothy Gulan provided comic relief and garnered some great hoots n’ hollers during the standing ovation that followed the finale.

At the end of the night we walked the few quick blocks back to the St. Regis after the show and slept soundly until it was time for our complimentary breakfast (complimentary for every guest). Served from 6:30am until 10:00am on weekdays, this was a full-serve, sit-down breakfast with juice and coffee right in the hotel. John packed up and headed to work, and I packed us up to head for home, just across town. The staff at the front desk was incredibly helpful and pleasant, even when I absentmindedly mixed up my St. Regis Liquor Store charge with a charge from the hotel. Our date night in the city — in our own city — was a great way to slow things down mid-week and enjoy Vancouver’s hospitality and culture.

Les Misérables is only in Vancouver until June 23rd so be sure to book your tickets through Broadway Across Canada for one of the 2:00pm matinées or an 8:00pm performance. For more information about Les Misérables and Broadway Across Canada’s other productions, follow them on Twitter @BACTouring. Find out more about the St. Regis Hotel on Twitter @TheSTRegisHotel and on Facebook.

Share16
Tweet
Share
Pin
Email
Reddit
WhatsApp
16 Shares
Current Contests on Miss604
*All contests are open to residents of Canada only, unless otherwise stated. Contest timelines are published on each individual post along with entry methods. Some contests may only be open to those 19 years of age and older. Winners are announced on the contest blog posts. Contest policy »
Comments are closed on this post
Advertisement