Merging onto the Knight Street Bridge, most drivers turn on their signals and merge once more to avoid the Mitchell Island offramp that comes up just after the first span. Most often you’ll find trucks using that exit though, as Mitchell Island has steel and electronics recycling plants, scaffold supply, ready-mix concrete, auto recycling, and welding shops. On the flip side of this rough-and-tumble industrial land is its agricultural history. The island was once the home of the area’s first successful pioneer farmer: Alexander Mitchell. Alexander Mitchell, after whom Mitchell Island is named, arrived in BC in April of 1877. He settled in Moodyville (part of present day North Vancouver) with his wife and children, and later took squatter’s rights as a pioneer resident on the small Richmond island. [Source: Chuck Davis’ Vancouver History]. 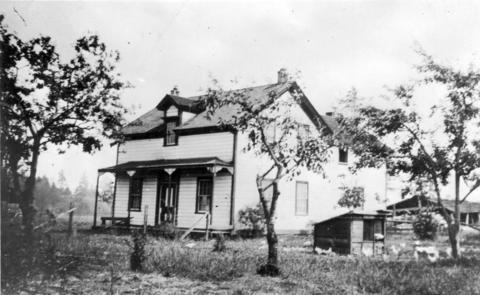 He then purchased the 330-acre property for $10 and built a pioneer homestead for his family. He acquired an additional 50 acres of land in north Richmond along the east side of No. 5 Road between Bridgeport and Cambie Roads.

“Mitchell recognized the importance of establishing a permanent link to Vancouver from North Richmond and successfully argued for the Fraser Street Bridge to be constructed in 1893. The original bridge required a hand crank to open for ship traffic to pass through. This vital link helped insure that the development of Richmond would continue well into the future.” [Source: Biographer Raymond Reitsma]

Alexander Mitchell also donated some of his property at No. 5 Road and Cambie to build a school in 1908 and it was expanded in 1922. The original Mitchell Elementary School has since been demolished but additions still stand, giving it the distinction of being the longest continuously operating school in the Richmond School District. Today, Mitchell Island’s western tip supports the Canada Line’s Fraser River (North Arm) crossing. One of the bridge’s pillars sits on the site of Eburne Island, which was incorporated into Mitchell Island in the 1950s when the channel separating the two was filled in.

The only way on and off the island is via the Knight Street Bridge. There is some public space at the Mitchell Island Pier which is 1.067 acres of park land with a fishing pier. A decommissioned rail bridge makes for an interesting photography subject and there are panoramic views of the bustling river activity along the island’s north and western shores.

Share10
Tweet
Share
Pin1
Email
Reddit
WhatsApp
11 Shares
Current Contests on Miss604
*All contests are open to residents of Canada only, unless otherwise stated. Contest timelines are published on each individual post along with entry methods. Some contests may only be open to those 19 years of age and older. Winners are announced on the contest blog posts. Contest policy »