I am proud to once again be the Social Media Sponsor of the Jessie Richardson Theatre Awards (the Jessies) and as such, I am featuring a local theatre company every Thursday.

These profiles contain basic information about each company, as supplied by their team, and a list of their upcoming productions that you can check out in the coming season. Today’s feature company is: Electric Company Theatre: 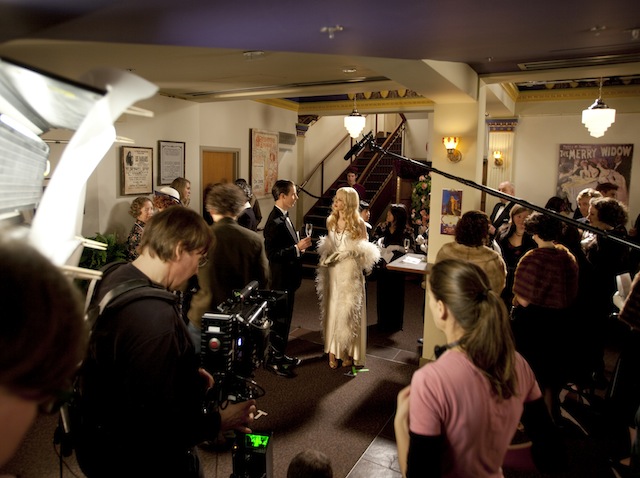 Electric Company Co-Founder and Director Kim Collier (foreground, pink shirt) amidst the flurry of a on-location film shoot at The Art Club’s Stanley Theatre for Tear the Curtain, 2010. Jonathon Young and Laura Mennell in centre. Photo by Tim Matheson.

SEE! SEE! SEE!
This Earth Made Rare
but you DIDN’T expect it
DREAMS GUARANTEED

Electric Company is dedicated to the creation of original works of theatre and the theatrical adaptation of existing texts with an emphasis on physical and visual imagery.

Perched like a spaceship in Vanier Park, the H.R. MacMillan Space Centre is being shifted from its position in your consciousness as a field-trip destination of childhood. YOU ARE VERY STAR is an immersive, and interactive transmedia experience that will transport you from 1968 to 2048. Come play with us, after closing, when we’re alone in this Vancouver jewel, filled with its ghosts, memories, and visions of the future. Try to remember what it was we all had hoped for.

Special Moment for the Company

Electric Company is Vancouver’s own moment maker. Maybe it is the moment you join us onstage.  Maybe when you watch us through your cardboard telescope on the shores of False Creek?  Maybe the moment the lights go down and you smell cinnamon. Or during an athletic pursuit of recision, with the threat of the accidental.  Maybe when you lean forward in a soft seat to witness the human animals in motion?  Maybe the seat is on a dolly track, when you are the camera and we are the grip.

Stay up to date on the latest from Electric Company Theatre by following them on Facebook and Twitter.

Share7
Tweet
Share
Pin
Email
Reddit
WhatsApp
7 Shares
Current Contests on Miss604
*All contests are open to residents of Canada only, unless otherwise stated. Contest timelines are published on each individual post along with entry methods. Some contests may only be open to those 19 years of age and older. Winners are announced on the contest blog posts. Contest policy »
Comments are closed on this post
Advertisement