Royal City Musical Theatre presents Rodgers & Hammerstein’s Oklahoma!. Celebrate the 70th anniversary of this show, hailed as the musical of musicals and filled with familiar tunes, until April 27th at the Massey Theatre in New Westminster. Over 44 cast members make up this large-scale production with Direction and Choreography by Valerie Easton, and Musical Direction by James Bryson. 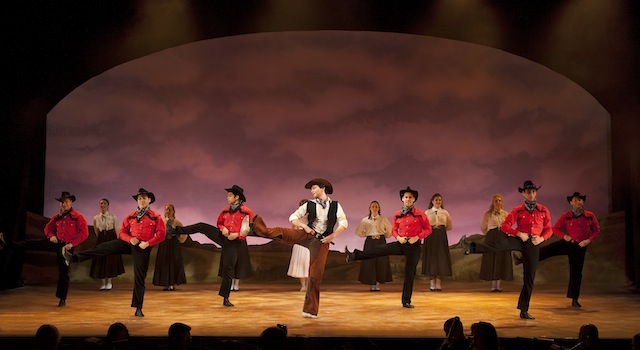 Rodgers & Hammerstein’s first collaboration remains, in many ways, their most innovative, having set the standards and established the rules of musical theatre still being followed today. Set in a Western Indian territory just after the turn of the century, the high-spirited rivalry between the local farmers and cowboys provides the colorful background against which Curly, a handsome cowboy, and Laurey, a winsome farm girl, play out their love story. Although the road to true love never runs smooth, with these two headstrong romantics holding the reins, love’s journey is as bumpy as a surrey ride down a country road.

Oklahoma! will run Wednesdays through Sundays at 8:00pm with additional matinees on Saturdays and Sundays at 2:00pm, now until April 27, 2013. Ticket range are $20 to $40 and are available online through the Massey Theatre box office or by calling 604-521-5050.

Also on Miss604.com
« Ceroc Around the Clock: Kitsilano Showboat Fundraiser
Surrey Party for the Planet 2013: Hey Ocean Meet and Greet »