Mexican singer/songwriter Lila Downs will be in Vancouver this weekend, bringing her award-winning music to the Chan Centre for one show only. Her music combines traditional Mexican melodies with blues, jazz, and soul. 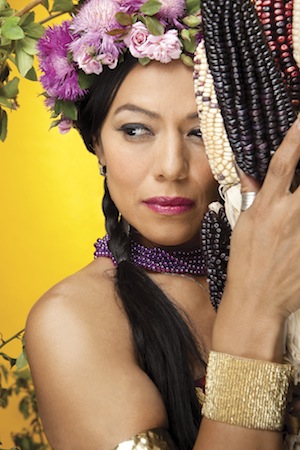 “Well-known for her lifetime of social activism, Downs works to maintain cultural identity, celebrating her indigenous Oaxacan heritage through song on her eleven albums. Her gorgeous new album, Pecados y Milagros (Sins and Miracles), which has won 2012 Latin Grammy and 2013 Grammy Awards, was heavily influenced by traditional Mexican votive paintings.

In turn, Downs was inspired to commission spectacular votive paintings for each track, which will be featured as projections throughout the concert. Based on the album, this unique performance will combine Downs’s sumptuous music and vocals with projected images of paintings from the exhibit, weaving together a powerful combination of sight and sound. The results are sure to be spellbinding.”

If you would like to see Lila Downs perform at the Chan Centre on Sunday, I have a pair of tickets to give away. Here’s how you can enter to win:

RT to enter to win tickets to see @LilaDowns at the @ChanCentre from @Miss604 http://ow.ly/k8gW8

Update The winner is Thalia!