Last night, at the Roundhouse Performance Centre, as part of the Vancouver International Dance Festival, Vancouver-based acclaimed choreographer and dancer Barbara Bourget (of Kokoro Dance) performed a very personal, transcendent expression of not just her fifty year creative life in dance, but also of life itself, called A Simple Way. 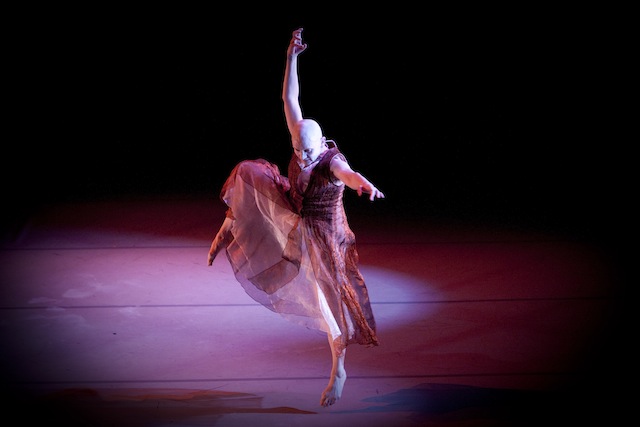 Accompanied by poetry by friend Elizabeth Dancoes and original music composition by her son, Joseph Hirabayashi (who is also a member of local bands the SSRIs and Aunts and Uncles), who played the grand piano, the performance had a deep, intense familial tenderness. At moments it felt as though the music drove Barbara’s movement and in others it was as though her physicality inspired the notes on the keyboard. I kept trying to figure what drove what, but quickly realized they they each fed and worked with each other and I stopped trying to track it or make sense of it, and just let it all simply flow, which is what the performance’s theme seemed to be centred around.

Barbara went from barely moving to shaking her cheeks back and forth (white powder on her skin making little clouds around her) to what seemed like frolicking through a field, to experiencing the deep sorrows in life. And I realize that as I write what actually happened during the performance through words in this review, I am not giving justice to the piece as words cannot express what happened last night.

Kokoro Dance Theatre Society has been in existence for almost twenty years, with Barbara and her husband Jay Hirabayashi being its founders and at the forefront of the dance scene in Vancouver, Canada, and the world. Influenced by the Japanese modern dance form known as butoh, Kokoro Dance has consistently pushed the boundaries of expressionistic physical movement, redefining what happens when East meets West, and incorporating the concepts of yugen (profound, mysterious sense of beauty in the universe and the sad beauty of human suffering), as well as wabi-sabi (transient and stark beauty of natural patina and aging).

Last night’s performance was one of–if not THE–most profound live performances I’ve ever witnessed in my life, and I wasn’t the only one who thought so, because Barbara and Joseph received a full standing ovation at the end. It was as though, in that one hour, you not only saw every movement possible a human body can do in one lifetime, but Barbara also emitted every emotion available to human existence, while paying homage to her fifty year life as a dancer. It was exquisite.

There are two performances left–tonight and tomorrow night at the Roundhouse Performance Centre at 8:00pm. I highly recommend watching this local legend’s dance of life. Tickets are available online through the Vancouver International Dance Festival or by calling (604) 662-4966.