There are hockey fans and then there are super fans, three of which Pepsi has found in Vancouver who all bleed blue, white, and green. Pepsi recently did a photoshoot with three Canucks Super Fans who will be the basis of a billboard campaign in Vancouver. They include Mohan Singh Vinning (PunJohnny Canuck), Amie Nguyen, and The Green Men (Sully and Force). 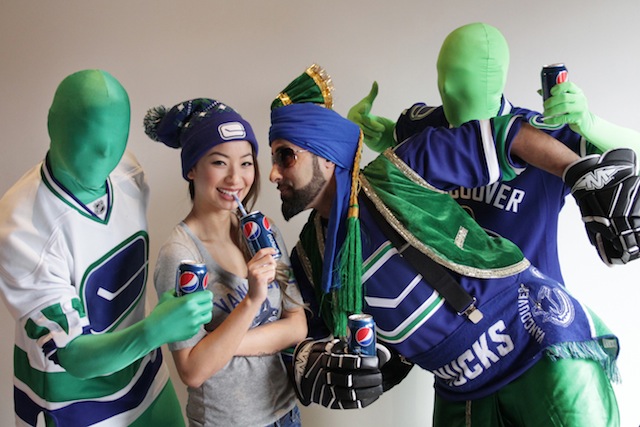 These fans support the team on the road and at home, dress up, write articles, make videos, and put themselves out there to show their Canucks pride. As a partner of the Canucks since 2012, Pepsi wanted to engage the Vancouver market and put a local spin on their “Live For Now” campaign (which features stars like Beyonce). What better way to embrace the spirit and culture of Vancouver than to showcase passionate hockey fans who embody the “Live For Now” spirit?

To celebrate Pepsi‘s commitment to Canucks Super Fans, I have been offered up a fantastic prize pack to give away that includes:

The winner will be able to cheer on the Canucks like how PunJohnny Canuck, Amie Nguyen, and The Green Men commit to doing, from the time the first puck drops to when the cup is raised. Here’s how you can enter to win this prize pack:

I will draw one winner at random from all entries next Friday, March 8, 2013 at 12:00pm. The tickets are for an upcoming regular season Canucks game (March 18, 2013). This contest has been approved by Pepsi and the Vancouver Canucks. Follow Pepsi Canada on Facebook and Twitter – and the Vancouver Canucks on Facebook and Twitter for more information.

Update The winner is Dayna Wilson!