The anthems ends, scarves go up, chants begin, and the ball is set in motion by some of the league’s top athletes. The stadium sings and roars without coaxing from the jumbotron, and when your team scores it feels like you’ve already won the season — and you can’t help but leap into the air and distribute High Fives all around. MLS soccer kicks off again in Vancouver on Saturday, March 2nd as our Vancouver Whitecaps FC take on Canadian rivals, Toronto FC. 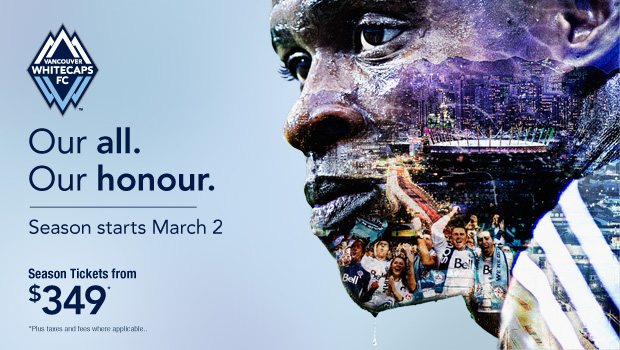 Last year, John and I were first-time season ticket holders and we even followed the Whitecaps to Los Angeles for their first MLS playoff match (they were the first Canadian team to make it to the playoffs). We renewed our season tickets as soon as they were available since we’re absolutely hooked on the fan experience and the beautiful game.

To get everyone just as excited as we are for the season, Vancouver Whitecaps FC have offered up 4 tickets to their opening match against Toronto for a lucky Miss604 reader. Here’s how you can enter to win:

RT to enter to win 4 tix to the @WhitecapsFC season opener from @Miss604 http://ow.ly/hXMZt

I will draw one winner at random from all entries on Tuesday, February 26, 2013 at 12:00pm. Follow the Whitecaps on Twitter, Facebook, and Instagram for photos, news, ticket information, and special offers throughout the season. Follow @WhitecapsMatch on Twitter for play-by-play updates during the matches and the tag #VWFC for topical updates from various users.

Update The winner is Leanne M!