Sun Life Financial is giving lucky fans the chance to skate with the Canucks at Rogers Arena on Monday, February 11, 2013 (which is also BC’s first Family Day holiday) and the Canucks are currently hosting a contest so that you can win your way in and participate in this unique on-ice experience. 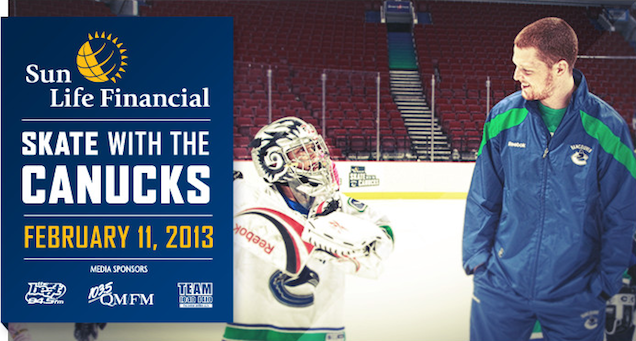 The Canucks’ big contest ends tomorrow but I also have 2 tickets to give away exclusively to a Miss604 reader and their guest. If you’re up for hitting the ice with members of the Vancouver Canucks, here’s how you can enter to win my tickets:

RT to enter to win your way into #SkateWithCanucks from @VanCanucks & @Miss604 http://ow.ly/htHeC

The winner will need to be able to attend on Monday (between 6:00pm and 6:55pm) and have their own skates and helmet. All participants will need to sign an on-ice waiver prior to entry as well. I will draw one winner at random from all entries at 12:00pm on Sunday, February 10, 2013.

Update: The winner is Michele!

This is an official contest in partnership with the Vancouver Canucks.

Also on Miss604.com
« Heritage Week in BC 2013 with Vancouver Heritage Foundation
Archives Photos of the Day: Cats »