Scotiabank Hockey Day in Canada is back on Saturday, February 9, 2013 to bring the country together through community events, on-ice activities, and of course plenty of hockey action as Canadian NHL teams face off.

Fans are encouraged to post a picture of their Best High Five Moment on the Scotia Hockey Club Facebook page (for inspiration, check out the High Five Series that my pals Vancouver is Awesome have kept up). Between Friday and Saturday, Scotiabank will randomly select 5 photos and those fans will get a personalized video message from an NHL alumni live from Peterborough.

On Saturday, February 9th, between 11:am and 12:00pm (Pacific) Scotiabank will be hosting a live tweet chat on @ScotiaHockey, whereby fans can ask questions to Lanny McDonald! Fans can either ask questions on Twitter or on Facebook but they need to use the tag #askLanny.

More high fives! This time, it’s an interactive gesture with the Scotiabank High Five to the Stanley Cup Final contest. Canadian hockey fans choose their team they want to support (this is the team they are going to follow for the season. Should they wish, they have one opportunity to change their team before April 3rd). Then, every time their team scores, fans have 10 minutes to go to the app to High Five. Fans can also opt-in to receive real-time goal notifications via email or text to make this step go quickly. After their team finishes a game, fans also have 12 hours to log on for a bonus High Five.

Each fan’s High Fives logged through the app counts as a contest entry and each week a random winner will be selected to win two tickets to any NHL game of their choice. On June 10th, one grand prize winner will be chosen who will receive a VIP experience for two to a Stanley Cup Final Game. Contest is open until June 9th, 2013 and is open to all Canadian residents.

To promote Scotiabank Hockey Day in Canada, I have a prize pack to give away that includes a toque, mittens scarf, skate sharpening device, an eco bag and a branded pin. 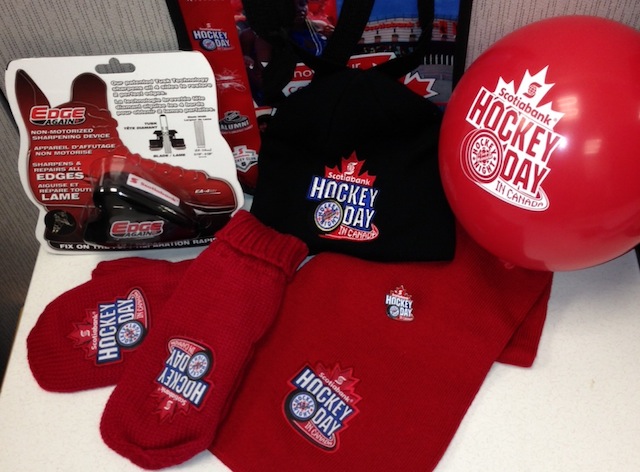 Here’s how you can enter to win this prize pack:

I will draw one winner at random from all entries at 10:00am on Hockey Day (Saturday, February 9, 2013). Follow Scotia Hockey on Twitter and Facebook for more information about Hockey Day in Canada this Saturday, live from Peterborough.

For Hockey Day activities in our region, check out what’s happening at the Richmond Olympic Oval. From 10:00am until about 7:00pm on Saturday, February 9, 2013 they’ll have “all things hockey under one roof”. Five Hole For Food will be on site to collect donations of non-perishable food items for the Richmond Food Bank and activities will include ball hockey, street hockey, memorabilia booths, collectibles, and more including numerous merchandise giveaways, prize draws and fun contests.

Visitors will include the Canucks’ mascot Fin, Canadian rockers Odds, and Hockey Hall of Famer Guy Lafleur. There will also be a Vancouver Canucks Alumni game vesus Richmond Sockeyes Alumni at 4:00pm (tickets are $15 online) with partial proceeds going to support KidSport.

Update The winner is Jas!