Neil O’Brien, host of “Neil With The B-Movie Reel” on CKNW Newstalk 980 forwarded me event information about his B-Movie Night event at the Collingwood Cinema (formerly the Raja Theatre) on Kingsway. 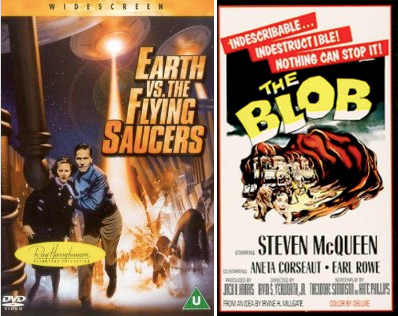 Neil is organizing a double feature on Saturday, March 2nd, 2013 with Earth Vs. The Flying Saucers (1956) and The Blob (1958) in the hopes that this will spark interest for a monthly B-Movie event.

As he puts it, “featuring the fun schlocky big bugs destroying cities, aliens invading earth in flying saucers attached to strings and aliens in rubber suits B-Movies Double Features from The Atomic Age. They’re a fun throw back to yester-year that is fun for anyone!”

The shows on March 2nd will begin at 9:00pm and 11:00pm and tickets are $10 for both movies or $7 for just one. Reservations are not being taken so just show up to enjoy all of the classic cinematic goodness.

I have to admit that most of the B-Movies I’ve seen have been during episodes of Mystery Science Theatre 3000, although that has actually led to an appreciation for the genre. If you would like to see this event turn into a monthly series be sure to let Neil know and get your tickets for this upcoming double feature.