Vancouver has earned many distinctions and topped many lists, from having some of the best city beaches, being the most congested or most expensive to the most livable, and now it’s Canada’s Most Walkable. 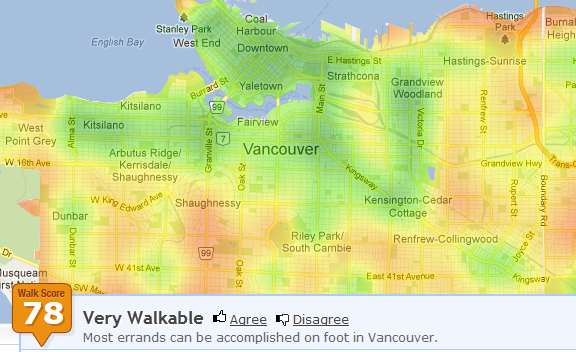 The “Walk Score Algorithm” measures the walkability of individual addresses based on proximity to nearby amenities along with city boundaries, neighbourhood boundaries, and population data. The study rated the walkability of more than 300 Canadian cities and 1,200 neighbourhoods. Given the number of points Vancouver racked up, it also outranks Seattle (where Walk Score is based) by 4 points. Victoria actually scored the same as Vancouver but its population is too small to make the ranking.

Walk Score is a helpful tool for planning how you’ll be able to get around a city in which you’re vacationing or looking for a new home. They also have Bike Score and Transit Scores that you can look up for various cities.