If you’ve lived in Vancouver long enough there are a few things that become a part of your everyday routine. At noon the O! Canada horns will sound at Canada Place, at 9:00pm the Nine O’Clock Gun will fire, and at around 5:30pm tens of thousands of crows will retreat to Burnaby from Vancouver. 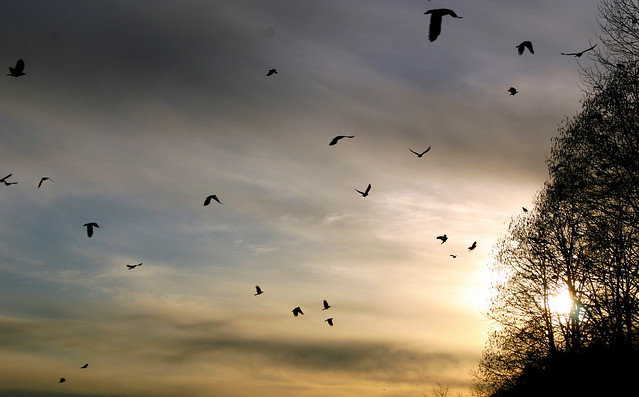 Photo credit: Judy B – The Travelling Eye on Flickr

I call it the “crow commute”. It’s as though 10,000 of the black birds pack their lunches every day and set out from the Willingdon area and head downtown, to Stanley Park, and surrounding beaches. A silent whistle blows at the end of the day and they all return home in one steady, ominous stream of black spots across the sky.

The Burnaby roost has been in use since about 1971. Prior to that, crows left the city for the evening. One roost was on Bowyer Island in Howe Sound. Crows from across the North Shore, UBC, and Stanley Park would make the late afternoon commute to the forested hills of Bowyer. A much smaller roost was somewhere up Indian Arm. Other roosts were in Richmond near the former dump along Highway 99. [Vancouver Sun, 2010]

When it comes to birds in the city, we have our share of french fry-stealing sea gulls and sidewalk-crowding pigeons along with photo-op worthy herons, owls, and bald eagles. Crows are low on the ‘nuisance’ meter for me but other West End residents didn’t always think so.

I was browsing the Vancouver Archives this week and discovered that on this day in 1903 crows were considered such a pain that the city decided to turn a blind eye to the firearm by-law in Stanley Park and allow sportsmen to shoot crows.

From Chuck Davis’ History of Metropolitan Vancouver: Crows made the news with a plan to allow sportsmen into Stanley Park “to exterminate the pest.” A bounty of “five cents per head up to 5,000 head” was offered and the park was closed to the public. Although a by-law banned the discharge of firearms within the park, officials said they would look the other way.

This wasn’t the first time that the people of Vancouver were fed up with crows. Chuck Davis also posted a piece from The Province from August 1900 where a letter to the editor states: “There are few residents in the city and particularly in the West End who are not disturbed in their slumbers from 5 a.m. by the fearful and nerve-killing noises made by the crows. A vote should be taken as to whether the people want crows or not.”

Over 100 years later, the immeasurable group flies over our heads every day, like clock work, perhaps to remind us of our past attempts to exterminate them. It seems like West End residents have finally learned to live peacefully with the crows or perhaps it’s the crows that have now accepted us.