Its recognizable dome lights our nights with a twinkle, and maybe even a Jack O’Lantern pattern at Halloween. Within its walls we learn about physics, engineering, chemistry, humans, animals, and the rest of the known universe. Science World (at Telus World of Science) is another one of the city’s most-photographed landmarks, by visitors and local alike – especially with a growing population in the adjacent Village on False Creek. As such, it is this week’s Vancouver Icon photo feature: 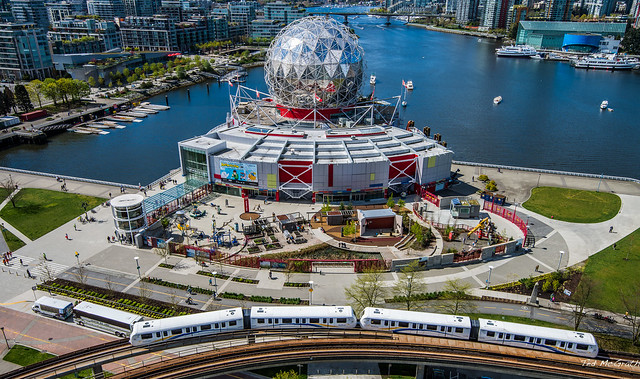 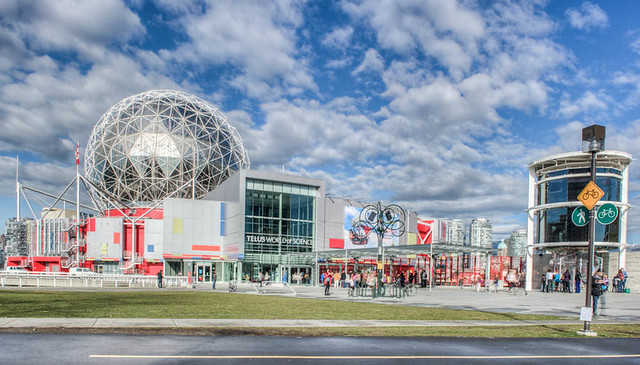 September Following Expo 86, an intensive lobbying campaign was launched to secure the Expo Centre for Science World. With three levels of government backing its proposal, the Arts, Sciences and Technology Centre succeeded in persuading the provincial government to designate the exposition’s famous “golf ball” as the new facility. The announcement was made this month [September 1987].

A massive fund-raising campaign ensued, with donations from the federal, provincial, and municipal governments, the GVRD, the private sector, foundations and individuals contributing $19.1 million to build an addition to the Expo Centre, redesign the interior and construct exhibits. Her Majesty Queen Elizabeth II dedicated the Expo Centre as “Science World. A science centre for the people of British Columbia” in October. [Source: Chuck Davis’ Vancouver History] Other Vancouver Icons posts include: Gastown Steam Clock, SFU Burnaby, Commodore Lanes, Siwash Rock, Kitsilano Pool, White Rock Pier, Main Post Office, Planetarium Building, Lord Stanley Statue, Vancouver Library Central Branch, Victory Square, Digital Orca, The Crab Sculpture, Girl in Wetsuit, The Sun Tower, The Hotel Vancouver, The Gassy Jack Statue, The Marine Building, and The Angel of Victory. Should you have a suggestion for the Vancouver Icons series please feel free to leave a note in the comments. It should be a thing, statue, or place that is very visible and recognizable to the public.