While there’s no big league action happening on television and in our high-capacity arenas, there’s plenty of hockey being played in rinks across the country. Players, coaches, and organizations of all sizes in communities across Canada have started their season and Mars® has partnered up with Hockey Canada to support these home-grown teams with their Play Your Part campaign.

Until the end of the year you can enter a pin code online, found inside specially-marked Mars bar wrappers, and Mars will donate $5 to a local rink. They’re supporting five local hockey rinks in Canada including the Mission Leisure Centre in Mission, BC.

The Mission rink needs a new score clock as their current one is more than 15 years old and they need to replace it before they host the 2014 BC Winter Games. 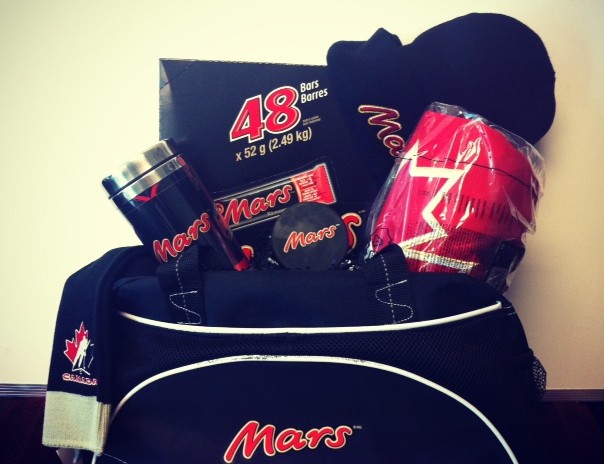 To spread the word and help them reach their goal, I have a Mars® and Hockey Canada themed prize pack to offer up to my readers.

Stocked full of Mars bars that will come in handy for Halloween, the prize pack (valued at $250) also contains a duffel bag, a replica Team Canada hockey jersey, and other goodies.

I will draw one winner next Wednesday, October 10, 2012 at 12:00pm. The winner should also be sure to enter the pin codes from their prize bars online in order to support the Mission rink. No purchase necessary, full campaign rules are available online.

Update The winner is Lorraine!